Collective sales of the biggest SUVs on sale in America totalled 17,640 last month. In the same period of 2010, sales of jumbo sport-utes totalled 21,137. That 16.5% drop, however, is mainly a result of falling jumbo SUV sales at General Motors. The Chevrolet Suburban, Chevrolet Tahoe, GMC Yukon, and GMC Yukon XL together lost 2799 sales, five from the Yukon, 469 from the Yukon XL, 851 from the Tahoe, and 1474 from the Suburban. The Nissan Armada and Kia Borrego were down in April, as well.

Although it isn’t easy pinning down the corners of the mainstream midsize SUV segment, based on the definitions GCBC uses in this post’s second Graph, there were 102,747 midsize utility vehicles sold in April 2011. That’s up from 78,934 in April 2010, a huge 30.2% year-over-year increase. How’d that happen? 23,813 new midsize SUV customers came to the segment by way of the all-new 2011 Ford Explorer (+7298 sales), 2011 Jeep Grand Cherokee (+6409 sales), 2011 Dodge Durango (+5062 sales), GMC Acadia (+2035 sales), Toyota Highlander (+1867 sales), Mitsubishi Endeavor (+1621 sales), and smaller gains from a various other models. These improvements more than covered up declines posted by the Nissan Murano and Suzuki XL7, as well as the disappearing act performed by the Jeep Commander and Mercury Mountaineer.

Finally, there’s the small utility vehicle category. With new-to-the-world vehicles like the Mini Countryman, Nissan Juke, and Mitsubishi Outlander Sport, you’d expect to see growth in the third chart. 161,802 smallerish SUVs and crossovers were sold in the United States in April, up from 127,879 in April of last year. An improvement of 33,923 sales has something to do with 6391 sales from the Countryman, Juke, and Outlander Sport. But it also has plenty to do with the greater volumes put up by the Ford Escape, Honda CR-V, Kia Sportage, Mazda CX-7, Nissan Rogue, Toyota RAV4, Volkswagen Tiguan, GM’s twins, three Jeeps, and a handful of others.

Meanwhile, pickup truck sales are at a three-decade low. 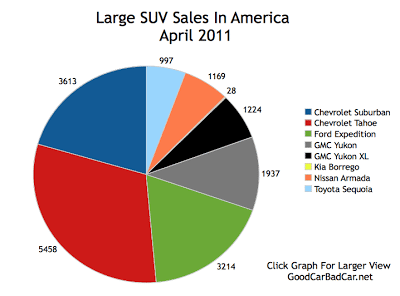 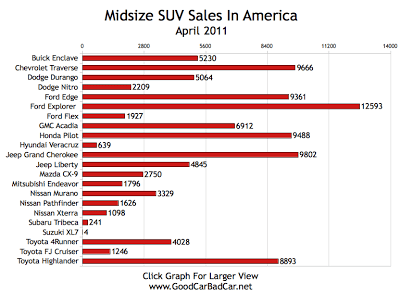 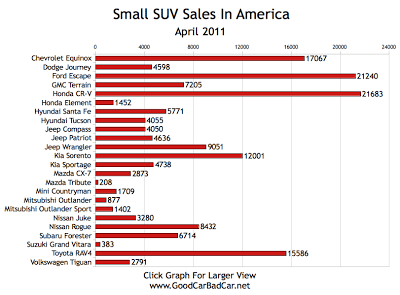