70% of the full-size sport-utility vehicles sold by non-luxury automakers in the USA in November 2010 were General Motors vehicles. Of that 70%, seven out of every ten GM SUVs was a Chevrolet. Of those Chevrolets, 57% were Tahoes. When GM gets it right, they really, really get it right.

Many are unwilling to give GM credit when it requires sales figures of two or three or four models to convey market control. GoodCarBadCar.net isn’t just willing to discuss GM’s specific areas of preeminence but any other automaker’s, as well. General Motors obviously feels they wouldn’t sell 21,289 Terrains if they abandoned the Chevrolet Equinox nameplate. It’s definitely believable that GM would fail to sell 19,305 Enclaves if the Traverse and Acadia were cancelled. But it isn’t GM’s “fault” that the company’s SUV/CUV market share in November 2010 was greater than that of any other company, even if GM went about it with multiple logos.

And by the way, other automakers did sell SUVs and crossovers in November 2010. Take a look at Suzuki and those 5 XL7s. Details on the sales figures of every mainstream SUV and CUV are in the Graphs below. 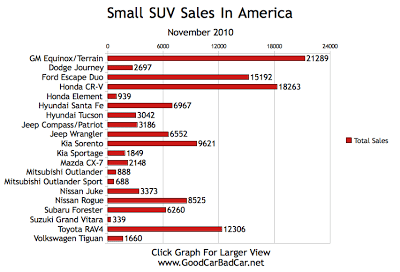 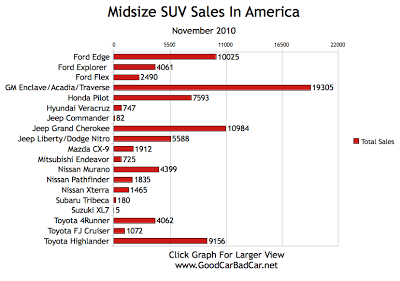 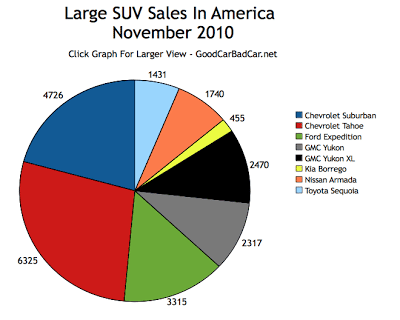