In 2001, the majority of vehicles listed in the Graphs below weren’t even heard of. The Ford Escape was a new entrant known to possess above-average on-road dynamics. From Japan, the Honda CR-V, Toyota RAV4, and Subaru Forester were lighting the fire in a segment which was quickly growing out of its niche-category childhood into a major component of the North American marketplace.

Advance the calendar by a decade and, as you can see in the second chart, small SUVs, their larger but similarly-priced competition, and rugged inexpensive alternatives accounted for more than 275,000 Canadian sales in 2010. The best-seller was, as expected, Ford’s Escape. Hyundai, Dodge, Honda, and Toyota tailed the Blue Oval by healthy margins. December’s final order was only slightly different, Hyundai having a slow(er) month selling Santa Fes as sales of their middle-rung utility vehicle slid 17.5%.

When glancing at some poor performers in December, the all-new 2011 Kia Sportage jumps to the forefront. Styled handsomely and equipped with a startling amount of standard equipment, the Sportage isn’t even selling as well as the run-out model from December 2009. Down 14.7% in December, the Kia Sportage deserves success but isn’t finding any, and was off 2009’s totals by 1562 units during the twelve months of 2010.

Finally, consider the Nissan Juke vs. Mitsubishi RVR battle. In the U.S., Mitsubishi’s sad state of affairs means the RVR (or Outlander Sport as its named south of the border) hasn’t come close to matching the Juke’s level of success. Mitsubishi, however, manages in Canada. Thus, the RVR is a fierce rival for the 2011 Nissan Juke. Sales in December were nearly identical; and during the short time the two mini-crossovers were on sale in 2010, the Juke found only 24 more buyers. 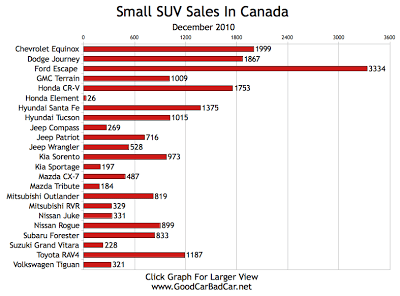 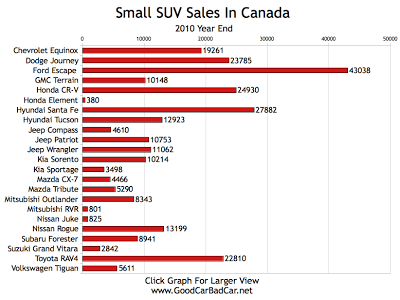