Where you see incredibly strong Kia Sorento sales now, is it possible to see incredibly strong Kia Sportage sales alongside? The 2011 Sportage looks better than its fraternal twin, the Hyundai Tucson, is priced similarly, and is set to work the same magic on customers that the Sorento’s been displaying for the last few months. But with a less expensive and still strong rival sharing showroom space with the Sorento, can Kia’s middle child continue selling like hotcakes? After all, the Kia Sorento was on America’s Best-Selling SUV list in July…. and not for the first time.

When the Austrian-built BMW X3 first arrived on North American shores for MY2004, it was over-priced, under-equipped, harshly-suspended, and undesirable. Fortunately for BMW, the X3 didn’t have to face off with competitors from Infiniti, Audi, Mercedes-Benz, Volvo, or Acura. With the EX, Q5, GLK, XC60, and RDX in the way, and a vastly improved competitor from Land Rover in the form of the LR2, BMW X3 sales have tanked. Spartanburg, South Carolina, is home to BMW X3 production for generation F25, a better-looking X3 which should take the fight to other small utility vehicles. But can the 2011 BMW X3 conquer the Cadillac SRX since General Motors moved its Cadillac crossover down a notch in size and price? It appears unlikely.

For all the Sales Stats on small SUVs and crossovers and small luxury utility vehicles, too, check out the Graphs below. 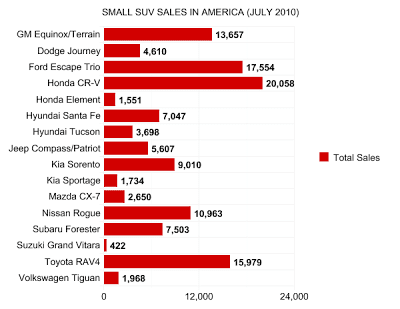 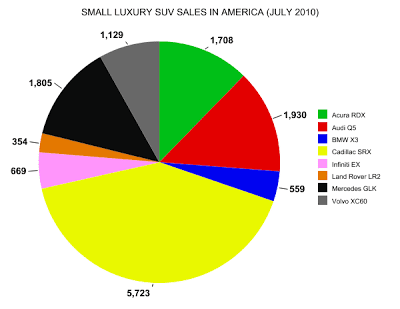