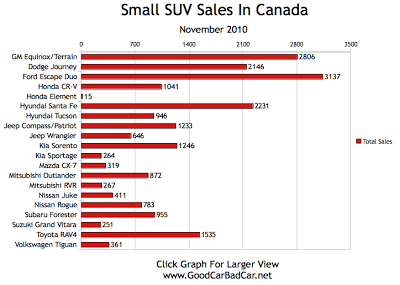 Home
All Vehicle Rankings
SUV Sales
Small SUV Sales
With the Chrysler Town & Country’s assistance, the Dodge Grand Caravan is Canada’s second-best-selling vehicle. Without it, Dodge’s minivan slots right in behind the Honda Civic; 1616 sales behind through the first eleven months of 2010. The Ford Escape is more than 20,000 sales in arrears.

Even so, the minivan segment is half-dead. Although the Town & Country, Grand Caravan, Toyota Sienna, and Honda Odyssey have all improved on 2009 sales levels, the segment has been beaten with a stick by smaller SUVs and crossovers in recent years. Not everybody has umpteen dozen kids and needs room for all those kids and all their stuff in one vehicle. Besides, some smallerish CUVs can seat seven as comfortably as the Mazda 5 anyway.

The small utility vehicle category was worth more than 20,000 sales in November in Canada. Minivan sales barely topped 7000. A moderately successful small utility vehicle like the Mitsubishi Outlander can grab close to 900 sales in a month at the beginning of winter. That’s more than Toyota’s heavily-marketed Sienna or the new 2011 Honda Odyssey. Are minivans amazing transportation tools for modern families? Yes. Are minivans desirable transportation tools for modern families? Quite clearly not.

Counted on to be hugely desirable in the latter part of 2010, the all-new 2011 Kia Sportage is a stylish and pleasant-to-drive small SUV with a decent history. Nevertheless, the new Sportage isn’t gaining traction in the marketplace. Sportage sales fell 8.7% in November and are down 31.6% this year. Shouldn’t the new model be revitalizing Sportage sales, rather than failing miserably like an antiquated run-out model? The Hyundai Tucson is engineered identically but looks completely different, in a not-as-good-looking kind of way. Yet Tucson sales were up 39% in November, out-selling the Sportage 3.6-to-1. Is this the 2011 Kia Sorento’s fault? The Sorento doesn’t cost much more than the Sportage ($23,995 vs. $21,995 for the Sportage) but is roomier and features more conventional, tougher SUV styling. The Sorento is a mad hit as Canada’s seventh-best-selling SUV in November. 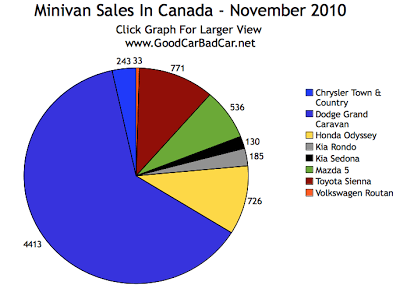