Ford watched the Escape post a year-over-year 12% sales drop in August, but the Escape – particularly with its Mazda Tribute platform-mate – remained the easiest ticket to large sales volume. 2989 Escape sales and 392 Tribute sales made the duo Canada’s favourite small SUV by a margin of 731 units over the Hyundai Santa Fe. Of course, combining the Hyundai Santa Fe with its long-lost sibling, the Kia Sorento, would push that duo’s sales total up to 3467.

Supplying dealers with the 2011 Kia Sportage hasn’t been easy for Korea’s fast-growing sub-Hyundai automaker. Compared with August 2009, Sportage sales in Canada are actually down 20%. U.S. Sportage sales fell 55% in August. Expect to see a significant rise in sales of the 2011 model in the very near future, possibly even to the point of overtaking the Hyundai Tucson.
Every small luxury utility vehicle other than the Acura RDX and Land Rover LR2 increased sales volume last month when compared with August 2009. Mercedes-Benz GLK sales were up 44.8%; Audi Q5 and Infiniti EX35 sales were up nearly that much; and Cadillac SRX sales were up an astounding 2279%. No matter what you may say about the low-volume, unappealing nature of the first-generation SRX, the smaller and more attractive second-gen SRX has been a hit. 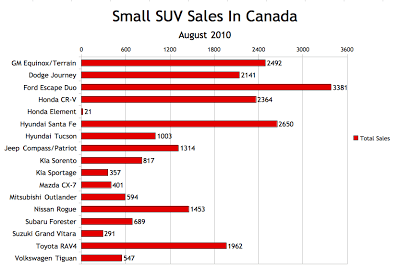 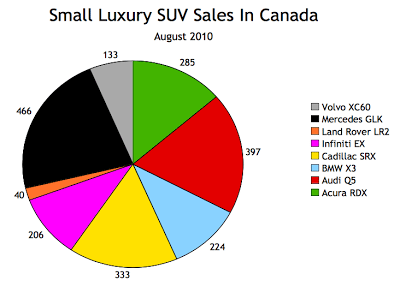