Toyota sold more vehicles than any other automaker competing in the USA in March. The Toyota Camry was the best-selling car in America in March. Lexus was the best-selling luxury brand in the USA in March. And now it’s revealed that, in a field of 16 small SUVs (19 if you split up the GM duo and the Ford Escape triplets), the Toyota RAV4 sold more often than any other small SUV (or CUV, crossover, cute-ute… whatever you wanna call’em) in the month of March, 2010. Somethin’ else, ain’t it?
If ever you needed more proof that the almighty dollar reigns in the hearts and minds of automotive consumers, this be it. The automotive press and the mainstream media were leading everyone to believe that Toyota’s reputation was tarnished. Repair of said reputation could take months or years. In reality, Toyota just needed to show consumers a lower dollar figure, or lower interest rates, or cash back. Over 130,000 small non-luxury SUVs were sold in the United States last month; the Toyota RAV4’s slice was nearly one-fifth of the whole pie, as you’ll see in the Graph below.
The sequence? Build a good product, perch it atop your company’s laurels, suffer a body blow, re-attract customers with deals, become the best-seller. 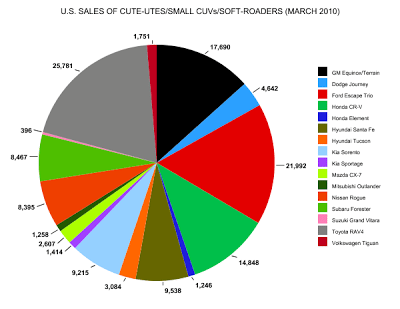