There’s no perfect way to define what makes one car a midsize luxury sedan or another a small or entry luxury sedan. The Infiniti G is bigger than some of its rivals, but because of its intended cross-shopping set and its price, its left with the smaller guys in the lower chart. The Lincoln MKS, on the other hand, is gigantic, with one of the biggest Mafia-loving trunks you can fill. Moving it up to the chart with BMW’s 7-Series or the Jaguar XJ wouldn’t be proper, however, so it’s here with the midsizers.

Realizing that tallying up all the sales garnered by midsize luxury cars in Canada isn’t a perfect math form, it’s still interesting to note that the BMW 3-Series out-sold all 17 of these cars in June. All 17 of these cars combined.

Volvo Canada sold one V70 last month. The greatest improvement in this group came from cars which weren’t on sale last year: the Saab 9-5, Audi A7, and jumbo Hyundai Equus, as well as the Volvo S80, up 5 units to a measly 55. Sales of the Mercedes-Benz E-Class/CLS-Class tandem fell 12%. Every other midsize luxury car’s year-over-year decline was worse.

When a status symbol becomes so attainable that it is, indeed, attained by so many thousands seeking status, does its status as a symbol of status lose stature? See, this was supposed to be an off year for the BMW 3-Series. There’s a new 5-Series which could appeal to typical clients of higher-end 3-Series sedans. The 1-Series M Coupe might take some of the shine off M3, if that’s possible. And, most important of all, the 3-Series is soon going to be replaced.

Yet 3-Series sales in Canada are down just 3% this year and were actually up 4% in June 2011. Already seen the results in GoodCarBadCar.net’s June 2011 Small Car Sales, Midsize Car Sales, and Large Car Sales charts? Then you’ll know the 3-Series out-sold the Honda Accord, Hyundai Sonata, and Toyota Camry last month.

This makes the 3-Series an awfully common site on Canadian roads. One out of every hundred new vehicles sold in Canada in June 2011 were 3-Series sedans, coupes, convertibles, or wagons. (3-Series market share in the United States was 0.87% in June, but an even higher 2.5% in the UK.) Perhaps, for you, the buyer who desires something exclusive, something which still says, “I’ve made it”, the Cadillac CTS is more appropriate. Its base price is $2115 higher than the cost of a BMW 323i sedan, but at least your neighbour doesn’t already have one. 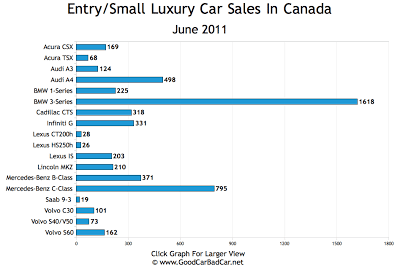