You can’t just enter any ol’ Hyundai dealership and buy an Equus. Its low volume is thus partially explained by its lack of availability. More likely, not all clients who want a car the size of a Mercedes-Benz S550 for the price of a Mercedes-Benz E350 want a Hyundai. That’s no criticism of the Equus, just an honest impression. Nevertheless, the Hyundai Equus out-sold the Acura RL, Lexus GS, and Saab 9-5 in May 2011. May was also the best month yet for the big Equus.

Far away at the top of the segment, above vehicles as unique as the Hyundai Genesis and Jaguar XF and Lincoln MKS, are the BMW 5-Series (up 93%) and Mercedes-Benz E-Class/CLS-Class (up 7%). 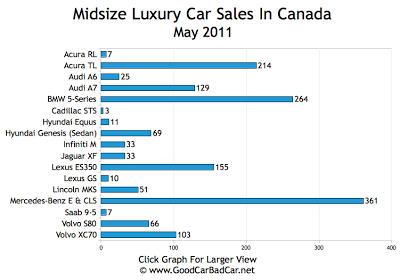 Nearly every look at every automotive segment over the last few weeks has made mention of the effect Japan’s March 11th disasters have had on Japanese automotive brands competing in the United States and Canada. More apparent than anything except the joint 3-Series/C-Class domination in the chart below are the struggles faced by Acura, Infiniti, and Lexus. It’s apparent enough that we’ll set all that aside this time it and say, “Better luck in June.”

You could say sales of another small Swede are skyrocketing, up significantly from zero in May 2010 to 13 last month. 13 is an important number, important for the status it brings to the Saab 9-3, the status of cellar dweller. Every possible 9-3 competitor sold in greater volume last month. Sales of its next-closest, fairly indirect competitor, the hugely undesirable Lexus HS250h, were more than double what Saab’s Canadian dealers achieved with the 9-3. 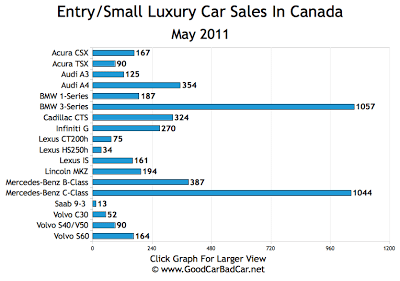