That’s an oversimplified analysis but it’s not inaccurate by any means. Large sport-utility vehicle volume remains high… in a sense. The eight vehicles mentioned above all posted year-over-year declines in May 2011 yet still managed to combine for 19,552 sales. That’s an eight-vehicle range which produced greater monthly volume than all but 14 brands. Demand, however, is clearly on the downswing. In May 2010, sales of these same eight mainstream large SUVs totalled 26,890. 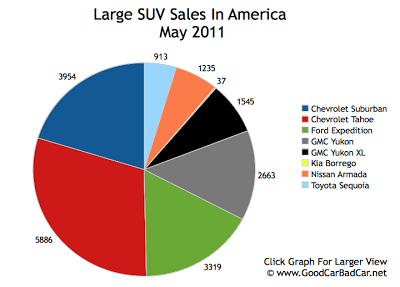 If new SUV buyers are flocking away from the biggest sport-utes on sale to the tune of a 27.3% drop, some midsize utility vehicles are bound to be beneficiaries. Obviously these sizing terms are loosely-defined – the Buick Enclave, Dodge Durango, and Toyota 4Runner aren’t the tiniest of midsizers, after all. The Enclave is only a hair shorter than the Chevrolet Tahoe, for one thing. The Durango weighs more than the Kia Borrego. And the 4Runner is more than two inches taller than the Highlander.

Speaking of those three, Durango sales were up 217,800% in May. Wow. You know why of course – there was no actively marketed 2010 Durango at this time last year. Buick Enclave sales were down 8% in May but are up 11% year-to-date. The story is similar for the 4Runner, down 24% in May but up 4% so far this year. The greatest increase among SUVs listed in the midsize chart below, apart from the dramatic Durango lift, came from the Durango’s close relation, the 2011 Jeep Grand Cherokee, sales of which jumped 192% last month. Ford Explorer sales rose 135%. Setting aside the Jeep Commander, Suzuki XL7, Mercury Mountaineer and other dead or dying models, the worse sales decrease was posted by the Chevrolet Traverse, down 38%. 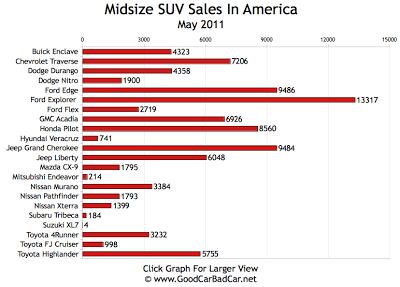 Growth in SUV/crossover sales isn’t hard to find if you look at the smallest and least expensive utility vehicles on sale today. The Jeep Compass, Patriot, and Wrangler posted increases in May. Others which achieved the same: Chevrolet Equinox, Ford Escape, GMC Terrain, Hyundai Santa Fe, Kia Sorento, Kia Sportage, and Volkswagen Tiguan. Many vehicles of Japanese origin struggled despite the efforts of their parent brands to renew supply after Japan’s horrendous March disasters. 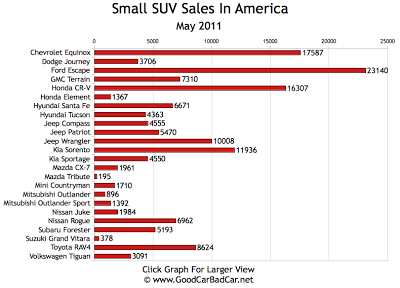