Why are there more people entering Buick dealerships looking for a Lucerne than there are LaCrosse-seeking customers? Perhaps finding a Cadillac DTS is increasingly difficult – now that it’s defunct – leading car buyers who want a big GM vehicle to Buick. The Lucerne is the last car to receive a modern Buick makeover, the sort of change that has made the Regal, LaCrosse, and Enclave hugely attractive.

This is all somewhat beside the point. The two Buicks were far from being the most popular big cars in Canada in May 2011. Give that honour to the less expensive Chevrolet Impala. Together, Chrysler and Dodge sold 889 300s and Chargers. That’s down 14% from their total LX platform sales during the same period of last year. 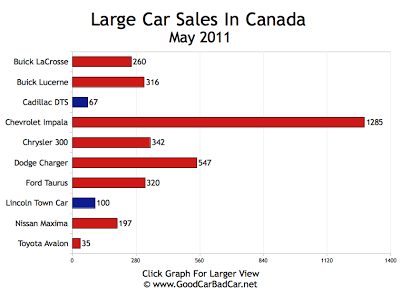 In Toyota showrooms the Avalon is barely visible to most new car buyers. The Camry and Venza are, however, carrying on a little battle in the price range above the Corolla and Matrix. In May, Camry sales fell 36%; Venza sales were off 16%, enough to drop below the Camry’s total of 879 sales. Year-to-date, the Venza leads the Camry 5163-3757.

Combined, the Venza tall wagon and Camry sedan are remain a force. But it’s the Hyundai Sonata and its 27.2% May sales increase which smoked the competition last month. The Sonata out-sold its closest rival, the Ford Fusion, by 444 cars. The Honda Accord was in tenth spot after sales plunged 46%. 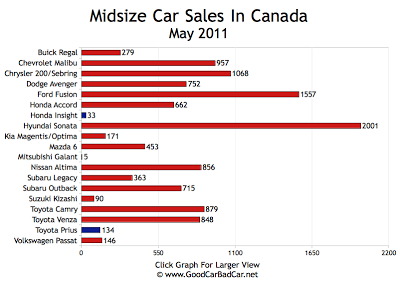 On the subject of the Corolla, Matrix, and Toyota’s other small car, the Yaris, there’s plenty of bad news to go around. Both the Yaris and Matrix were on Canada’s list of 10 Worst-Selling Cars in May. Corolla sales, meanwhile, were down 27%.

There are reasons for this, reasons which also explain why a brand new Civic isn’t selling quite as well as the old Civic was at this time last year. Toyota will report its first operating loss in 70 years. Profits will be down 63% at Honda, the company estimates. Deep down in the compassionate souls of Chevrolet, Hyundai, and Ford you would hope you wouldn’t find celebratory spirits post-earthquake, but the Cruze, Elantra, and Focus are reaping benefits from Japan’s problems. The Cruze is up 27% from what the Cobalt managed in May 2010. Hyundai’s Elantra was Canada’s best-selling car in May. May sales of the $15,999-$25,099 2012 Ford Focus were up 13%. 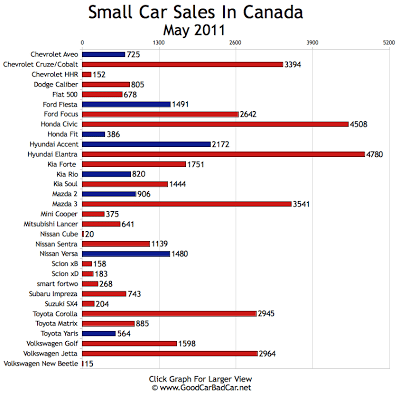