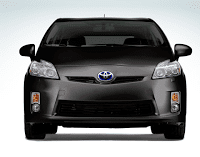 Suggesting that you take the three auto sales charts below “with a grain of salt” would be misleading. The figures, after all, are true and verified by the automakers themselves. In every auto sales chart The Good Car Guy publishes there’s always one or two items we should be aware of that prove auto sales results don’t always relate to demand. In the case of the charts below, there are a whole bunch of results which were skewed by poor supply in Japanese brand dealerships.

For example, sales of the Toyota Prius fell off the Best-Selling Cars list and nearly ended up on the Worst-Selling Cars list in May. Thinkest thou that Prius demand, despite fuel prices that are still pretty high, suddenly disappeared? Of course not. There were issues. Those issues will be overcome soon. Toyota Prius sales decreased 44.5% from April to May; the market as a whole fell just 8.5%.

So while giving credit to the Chevrolet Malibu for its dominant best-selling month, we must also remember that it isn’t normal for the Toyota Camry and Honda Accord to be the fifth and sixth-ranked midsize cars in the United States. Read more on each segment below their respective charts. 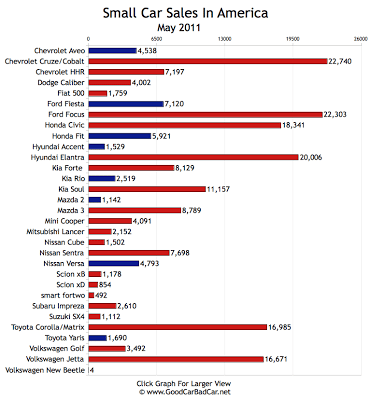 Curious things occurred in the small car segment in May 2011. The Chevrolet Cruze has been popular since Chevrolet introduced the Cobalt replacement. Beating out the Toyota Corolla and Honda Civic can’t be as satisfying as Chevy would have hoped given Japan’s disasters. But beating the 2012 Ford Focus, at the same time the Chevrolet Malibu beat the Ford Fusion to become America’s best-selling car, isn’t easy. For one thing, Ford offers the Focus in two unique bodystyles, a sedan and 5-door hatchback. You could also make a case for the Focus’s superior styling. Cruze sales (including 29 Cobalts) were up 40.6% in May over the Cobalt’s May 2010 effort. Focus sales jumped 31.7%.
No small car posted a greater sales increase than the Kia Soul, up 81.9% year-over-year. Obviously the Volkswagen New Beetle’s decline was expected. Apart from that VW and the defunct Chrysler PT Cruiser, no small car posted a sales decrease worse than the Hyundai Accent, down 63.5% as Hyundai dealers wait for full stock of the all-new 2012 Accent. Canadian Hyundai dealers sold 643 more Accents than their U.S. counterparts in May. 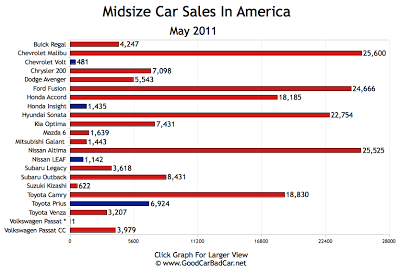 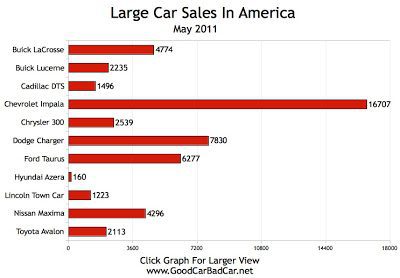 Finally, sales of every mainstream large car slid downwards in year-over-year comparisons. On its last breath, the Cadillac DTS was down 33.9%. The Lincoln Town Car, also a dying breed, was up 9%.