In May 2010, the Cadillac SRX ranked #2 in luxury utility vehicle sales in the United States. Although the Lexus RX was way out in front with more than double the Cadillac’s total, the RX was the only vehicle ahead of the Cadillac in terms of luxury SUV/crossover/CUV sales. That’s saying something.

Priced from $33,830 in the USA, the Cadillac SRX compares favourably with GoodCarBadCar.net’s favourite small SUV – the Audi Q5 – and its $37,350 pricetag. One look at May 2009’s figures will tell you Cadillac SRX sales were up 654.3% last month. Yowzah. Another vehicle not in this Graph but classified one segment up with the midsize luxury SUVs and crossovers is perceived to be a fairly direct competitor for the SRX. But Lincoln MKX sales reached just 1,705 in May. Besides, the Lincoln is priced from $38,845.
There’s no doubt about it: the Cadillac SRX is selling on styling, but the value card ain’t hurtin’. Sales of other small SUVs can be seen in the Graph below. 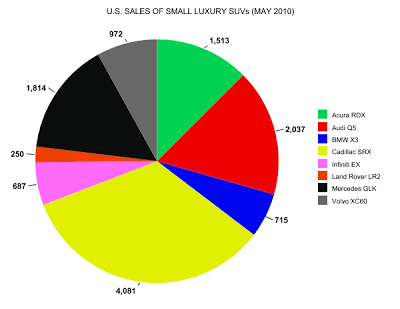