24,881 German luxury sport-utility vehicles were sold in Canada in 2010. That’s up from 20,660 in 2009, a 20% bump that’d mean a whole lot more if not for the fact that just five years ago, only 9734 German luxury SUVs were sold in Canada. In other words, from 2005 to 2010, German luxury SUV sales increased 156% in Canada, a percentage change which is unlikely to repeat itself by 2015. These numbers include the Volkswagen Touareg, despite its proletarian badge, and the Mercedes-Benz G and GL-Class SUVs from the large luxury SUV segment not shown in the Graphs below.

It sounds strange to say as gas prices rise and jobless rates remain high that, if the U.S. auto industry wishes to compete in the premium category, they need to sell more…. Ess-You-Vees? Cadillac and Lincoln together only sold 10,023 sport-utes and crossovers in 2010, more than double 2009 levels; not a whole lot better than double 2005 levels. Granted, there are only two “domestic” brands competing compared with what feels like countless German companies: four-rings, propellers, three-pointed stars and the like.

There are specific battles being waged, whether automakers’ Canadian outposts admit to acknowledging them or not, which form interesting sub-plots in the small and midsize luxury SUV segments. The Acura RDX smoked its Japanese compatriot, the Infiniti EX, by 1238 sales in 2010. BMW’s X5 narrowly saw off the Mercedes-Benz M-Class despite an impressive December at Mercedes which accounted for more than 12.5% of the M-Class’s yearly total. Though not directly price comparable, the Acura ZDX and BMW X6 are birds of a feather: BMW topped Acura after a late incentive-driven ZDX challenge. The Audi Q5 only just beat out the BMW X3, a feat which will be more difficult in 2011 when an accomplished new X3 makes the outgoing X3 look like… well, an old X3. Finally, Indian-owned Land Rover posted pleasant overall gains in 2010, a story which would perhaps have gone unwritten had the Range Rover Sport not succeeded with a 39.5% increase and a victory over Porsche’s Cayenne. 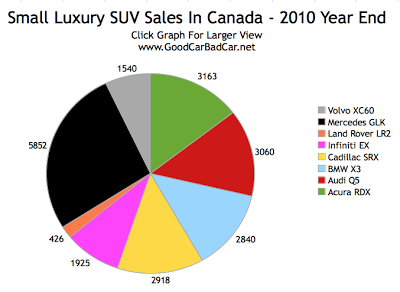 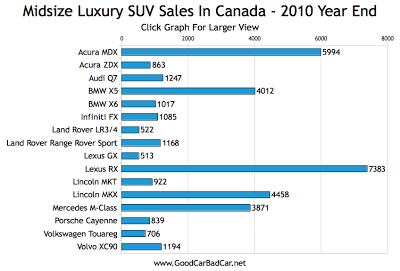