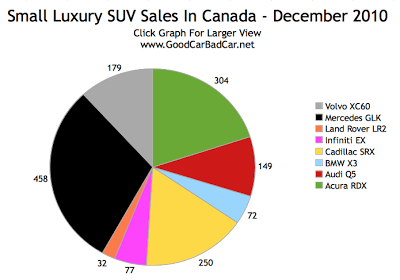 Home
All Vehicle Rankings
SUV Sales
Small Luxury SUV Sales
There are plenty of new automobiles more popular in the United States than the Cadillac SRX, but in the luxury SUV world, the SRX resides at the top with Acura’s MDX and the Lexus RX. Canadians, however, for whatever reason, have not taken to the new SRX with nearly as much fervour. In fact, Cadillac’s somewhat more expensive cross-town rival, Lincoln’s MKX, isn’t far from being twice as sought after. Given the Lincoln MKX’s status as a tarted-up Ford Edge, an immensely popular utility vehicle in Canada, this shouldn’t be all that surprising.

For a few hundred dollars less than the 2011 Cadillac SRX, Mercedes-Benz Canada will sell you a basic rear-wheel drive GLK350. It is that vehicle that’s grabbed hold of the hearts of Canada’s small luxury SUV buyers, as the GLK out-sold the SRX by 208 units in December 2010. Mercedes-Benz GLK-Class sales were up 27.6% in the final month of 2010; SRX sales jumped 33.7%. Meanwhile, Acura had a strong #2 finish with the aging RDX but sales were actually down slightly from 337 in December 2009.

As for the aforementioned Lincoln MKX and its competitors, Mercedes-Benz was unusually strong as a 64.2% increase over December 2009 shot the M-Class up to top dog status last month. The 2011 Mercedes-Benz ML350 4Matic starts at $57,400, approximately $16,000 north of the GLK350. Acura MDX sales jumped 39.8% while Lexus faced a decline of 40.1%, a fact which didn’t trouble the RX’s year-end positioning atop the standings. 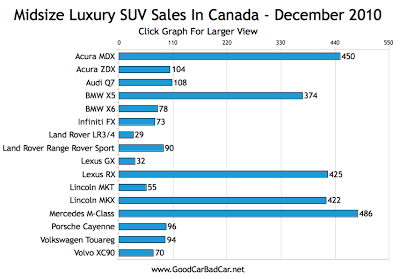