If the first list of luxury utility vehicles you see below was a pie chart instead, the Lexus RX’s slice would fill more than half the circle. 96 of the RX’s 828-unit April 2011 total were RX450h hybrids. In April, the RX 450h was down 6.8%; its down 24.4% year-to-date. It was the Lexus brand’s second-best-selling hybrid last month, trailing just the hybrid-only CT200h.

Don’t get the wrong impression. It isn’t even as though the conservative Lexus RX350/RX450h coalition was able to form a Harper-like majority. 74% of midsize luxury SUV buyers chose something other than the RX in April. 1139 of them opted for German-designed high-riders like the Audi Q7 (up 93%) and Porsche Cayenne (up 341%), decent choices both. Then there were the British beasts from Land Rover, the LR4 and Range Rover Sport, combined sales of which climbed to 176 from 138. Meanwhile, Volvo XC90 sales climbed 18%. The XC90’s very distantly-related long-lost cousin from Lincoln, the MKT, suffered a 63% decline in April and is down 56% so far this year. 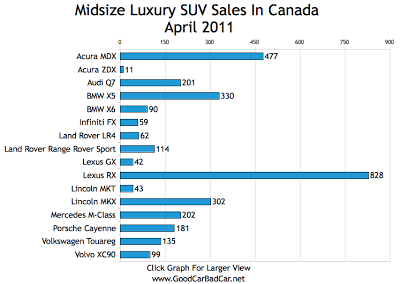 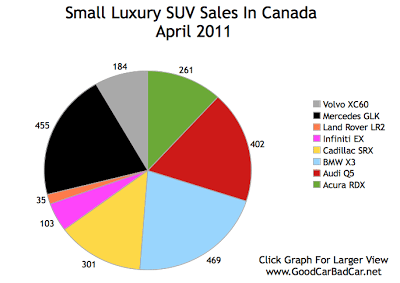 Unmentioned in the Graph above is the BMW X1, 105 of which were sold in Canada in April.