Lincoln MKX sales more than doubled to 597 in March 2011, but that wasn’t enough to unseat the Lexus RX as Canada’s most popular luxury utility vehicle. Of all premium brand vehicles, the MKX was the fourth-best-seller last month, an impressive feat for a vehicle which managed to find just 295 buyers in March 2010. Lexus RX sales rose 5%, pretty much on par with the overall market’s year-over-year increase.

Though at first glance MDX sales appear healthy, sales of Acura’s largest utility vehicle actually dropped 16% in March. Of the seven Acura nameplates on sale in Canada only the awfully slow-selling RL posted a year-over-year increase. The Acura ZDX had it roughest – sales plummeted from 56 to just 13. Is that because Canadians are listening more intently to GoodCarBadCar.net’s The Bad 8? We wish.

These two categories are difficult to isolate; that’s part of the reason for displaying them in the same post. Nevertheless, with the definition used here, there were 3394 “midsize” luxury SUVs sold and 2248 “small” luxury SUVs sold in Canada in March. Combined, that’s down 4.5% compared with last year. Don’t blame the Land Rover LR2, Audi Q5, BMW X3, Volvo XC60, or Cadillac SRX for that fact. Those five vehicles together found 499 more buyers this March than last. Sales of the Good 12-winning Audi Q5 jumped 40.5%. The second-generation X3 brought about a 72.3% boost. 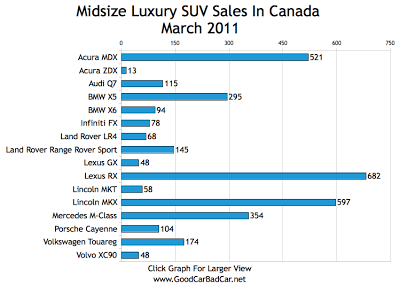 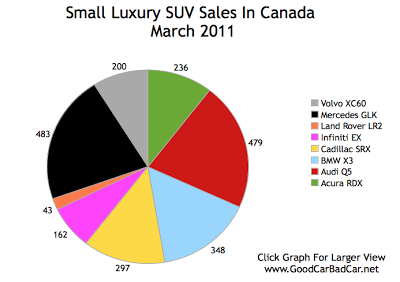