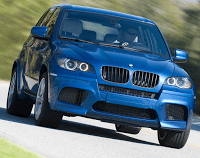 Selling midsize luxury SUVs and crossovers in Canada wasn’t quite as easy for some automakers last month as it was in the same period of 2010. Unless you’re selling a bigger German vehicle, that is. Sales of the Audi Q7, BMW X5, BMW X6, Mercedes-Benz ML-Class, Porsche Cayenne, and Volkswagen Touareg increased compared with January 2010. All the others on this list of midsize luxury SUVs, excluding the Lincoln MKX’s and its 3% bump, suffered declining sales.

Most notable among the gains are sales of the 2011 Porsche Cayenne. It’d be nice to think The Good Car Guy’s Good 12 inclusion had something to do with the January spike.

On the smaller and/or less expensive side of the ledger, the Audi Q5 had a tremendously successful month, up 151% from December in an overall market that fell 24.3%; up 135% from January 2010 in a market which increased just 4% year-over-year. That said, sales of the Volvo XC60 shot up 241.9%, Land Rover LR2 sales were up 79%, Cadillac SRX sales were up 50%, and the BMW X3 was up 66%. The GLK-Class Benz was down along with the Infiniti EX and Acura RDX.

Sales of every luxury SUV and crossover except for the big’uns are in the Graphs below. 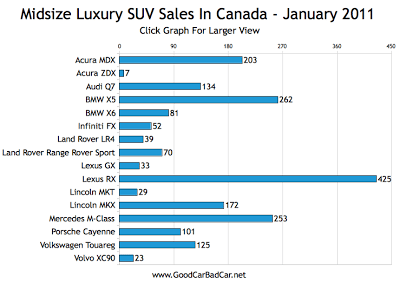 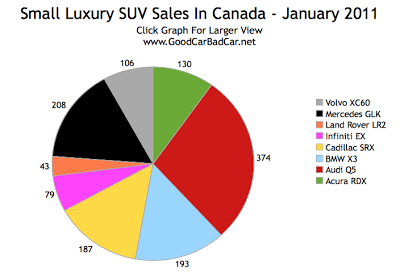