Earlier this week The Good Car Guy showed five Graphs which explained with no small measure of thoroughness how greatly Volvo USA is relying on the XC60. On a similar note, the Volvo XC60 formed 31.4% of all Volvo Canada sales in November 2010. In a more normal manner, the best-selling small luxury utility vehicle, the Mercedes-Benz GLK350 4Matic, made up just 19.7% of all Mercedes-Benz Canada sales in November.

Not unlike the situation with the 2011 BMW 5-Series in the midsize luxury car category, the brand new 2011 BMW X3 will likely have enough sway to reconfigure the small luxury SUV segment in the coming months. Will the GLK stay on top, or will the X3’s seven competitors all lose sales?

Those who love to compare Canadian and U.S. sales data will be interested in the Cadillac SRX vs. Lincoln MKX battle that may not even exist. In the USA, the Lincoln MKX starts at $39,145; the SRX starts about $5300 below the MKX. U.S. sales this year have the SRX topping the MKX by 25,558 units. In Canada, where the 2011 Cadillac SRX is priced $4720 below the MKX, the MKX is 1.5 times more popular than the SRX.

Details on exact sales figures are in the accompanying charts. 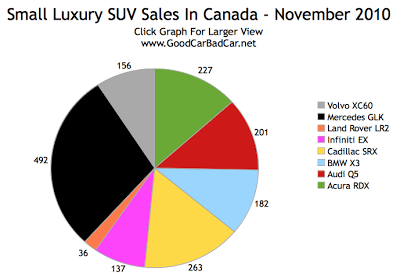 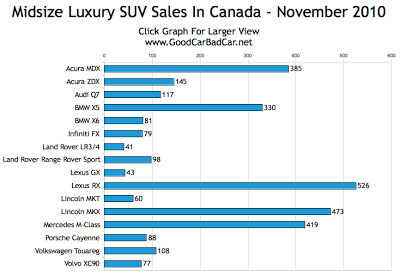