There are 13,075 sales represented in the small luxury SUV chart below. 30% of them are Cadillacs. 58% are of European origin.

That leaves the Acura RDX, down 21% in June 2011, and the Infiniti EX, down 35% in the same period. There’s no doubt that Infiniti and Acura have been affected by Japan’s recent catastrophes, but let’s not deny that the RDX and EX35 need replacing. Consider the strength of the opposition, not just in market share but overall desirability, and the $32,895 RDX and $35,200 EX35 look weak. 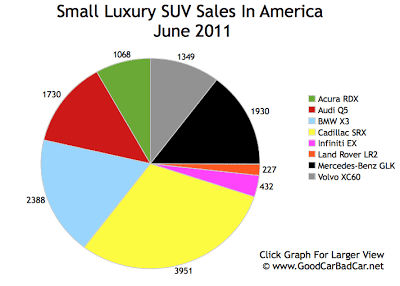 The Lexus RX, on the other hand, suffered a significant 34% sales drop in June but’ll probably be just fine without a near-term replacement. As the third-best-selling luxury vehicle in America last month, the RX was America’s favourite premium utility vehicle, ahead of the aforementioned Cadillac SRX, the Acura MDX (down 12%), BMW X5 (down 4%), and Mercedes-Benz M-Class (up 45%).
The Good Car Guy is not a fan of the Acura ZDX, sales of which fell 61%, the BMW X6, sales of which fell 11%, or the Lincoln MKT, sales of which fell 24%. ‘Round these parts, the Land Rover LR4 is considered cool. Land Rover reported an improvement of 12% year-over-year improvement for the $48,500 beast and a 21% improvement for the $60,495 Range Rover Sport. 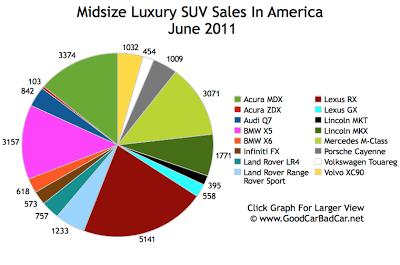