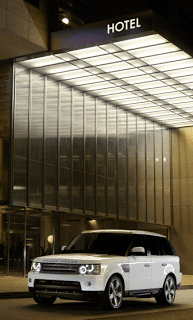 The total large luxury SUV category, which no longer includes the $52,345 2011 Lexus GX460 (not sure why it was ever there in the first place), was worth 7794 sales in the United States in November 2010. That’s less than the total number of Subaru Outbacks sold in America last month and less than any combination of two somewhat popular SUVs or crossovers from the Graphs below. The small luxury SUV category – which includes the larger but nicely-priced Cadillac SRX – grabbed 11,478 buyers in November. There were just about 30,000 U.S. buyers of midsize luxury SUVs in November, 29,600 to be exact.

It’s not easy deciding which vehicles should go in which chart on GoodCarBadCar.net, by the way. It’s not a random process nor are there hard and fast lines. In any case, most Graphs on GCBC indicate which vehicles are most likely to be cross-shopped – a fate which wasn’t afforded to the Sporty Car Sales chart. The most difficult task? Separating vehicles into the two pie charts you see below.

Is it possible that a Lexus RX owner test drove a Mercedes-Benz GLK350 4Matic? Of course… but it’s also possible s/he drove a Lexus ES350. Nevertheless, the potential cross-shopping of non-gigantic luxury SUVs is the most difficult to pinpoint, so there are a lot of vehicles lumped into one chart and a few more directly comparable in another. As you can see, they’re all here in one post together. (You get the impression there’ve been complaints about The Good Car Guy’s discrimination against/for the Lexus RX and Cadillac SRX? You better believe it.)

With that over, there are a few specific points of interest in November 2010’s edition of this post. Land Rover LR4 sales were up 155% in the U.S. last month. BMW X3 sales plummeted 66% as the new X3 finds its way to dealers. The Lexus RX remains America’s best-selling luxury utility vehicle but sales did fall 8.7% compared with November 2009. Finally, even by the abysmal standard of the Acura ZDX, November’s total of 156 sales was bad, 117 below the Acura’s average monthly sales. Even so, there shouldn’t be 156 people ready for a good suckering by an Acura sales consultants in one month. 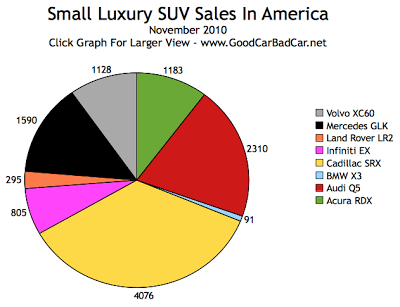 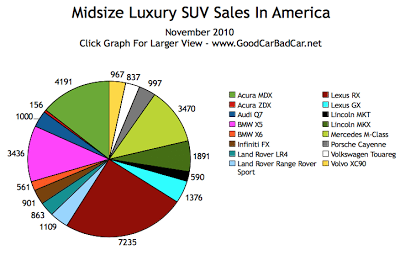