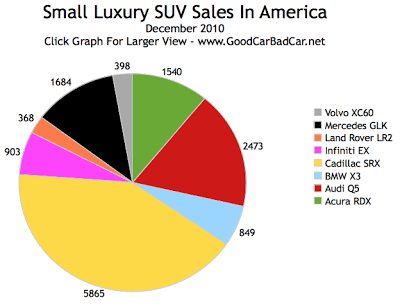 Home
All Vehicle Rankings
SUV Sales
Small Luxury SUV Sales
Eight vehicles which didn’t exist or have a vehicle category in which to exist a decade or so ago combined for more than 14,000 U.S. sales in December. While some argue that the Cadillac SRX is a more direct competitor for the similarly-sized Lexus RX and Lincoln MKX, its price point – particularly now that the SRX range lacks a turbo version – pits it squarely against the European and Japanese competition. In so doing, the Cadillac SRX crushed its competition in December, just as it has month-after-month in recent times.

In what was a boom market for many automakers in December, the Mercedes-Benz GLK350 and Land Rover LR2 both posted 29% sales drops. Audi Q5 sales were up 44%. SRX sales, as you would’ve guessed, were up nicely with a 17.6% gain. 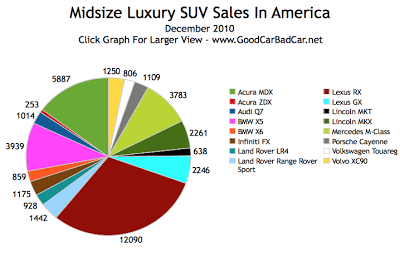