In every single month of 2011 thus far, the Lexus RX has been the best-selling luxury vehicle in the United States. That’s a good thing for Lexus. And RX sales were up 4.7% in April, another piece of good news. Also, RX sales are up 7.3% through the first four months of 2011. But then there’s the GX460. GX sales soared 36.6% in April, yet even with that increase, GX sales have plummeted 19.7% year-to-date, a significant 1090-unit drop. That’s more than one-third of the overall Lexus brand’s decline in 2011. Still, that’s nothing compared to the Lexus HS250h’s 78.4% drop.

The RX certainly has the not-completely-dissimilar Cadillac SRX beat. Easily the RX’s closest rival in terms of volume, the SRX trailed the Lexus by 3422 sales in April 2011 alone. Yet the SRX remains a runaway hit for Cadillac. No other two utility vehicles in the Graph you’ll see at the bottom of this post can combine to triumphantly challenge the SRX. Lately, there’s been important SRX-related news from Cadillac: a 300-hp 3.6L V6 will anchor the lineup by summer’s end, a major plus for Cadillac dealers.

What the Land Rover LR2 does not have is a new engine. Sales of the smallest Land Rover SUV fell 15.7% in April and are down 23.2% through the first four months of 2011. That’s without the soon-coming Evoque to challenge the LR2 in Land Rover showrooms. The Infiniti EX35, a consistently lackluster Infiniti promoter in this popular small luxury SUV segment, was nearly twice as successful as the LR2 in April. 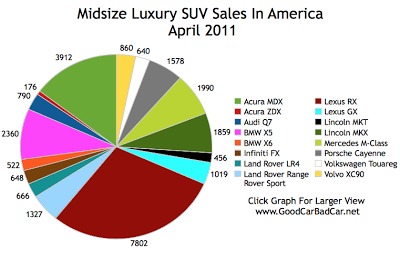 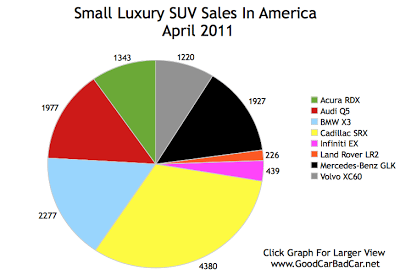