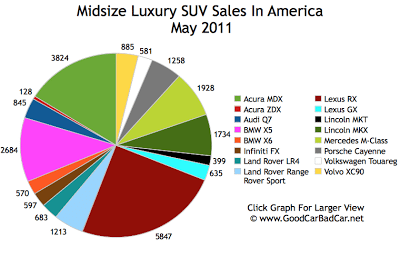 Home
All Vehicle Rankings
SUV Sales
Small Luxury SUV Sales
Lexus RX sales plummeted 36% in May 2011 yet the RX was still America’s best-selling luxury utility vehicle and the nation’s second-ranked luxury vehicle overall. Priced $3855 above the RX350 while offering an extra row of seats, the Acura MDX is listed in the same chart for arbitrary reasons. MDX sales fell 6% last month but remained higher than any competitor’s except the RX.

The German competition wasn’t really able to take advantage of any crisis felt by Japanese automakers. BMW X5 sales rose by only 23 units, Mercedes-Benz M-Class sales fell 15%, and the Audi Q7’s gains amounted to a sliver compared to the usual Lexus/Acura output. Sales of the $44,450 2011 Volkswagen Touareg jumped 107% but remained low in contrast to popular players in the segment.

Infiniti EX35 sales dropped 36% and Acura RDX sales fell 31% in May, declines which were worse than those felt by their overall brands. Of the 13,757 vehicle sales shown in what GoodCarBadCar.net terms the Small Luxury SUV chart below, just under 50% were German-designed products – the BMW X3, Audi Q5, and Mercedes-Benz GLK. 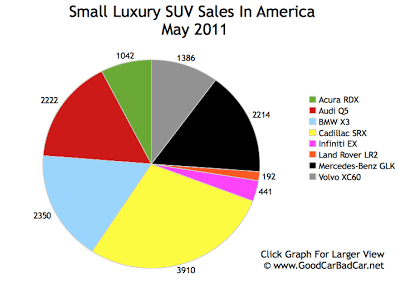 Start typing to see results or hit ESC to close
Sales By Model Market Brand Sales US Auto Sales 2020 2019
See all results
This website uses cookies to ensure you get the best experience on our website. By continuing to use this site you agree to these cookies. Learn More.