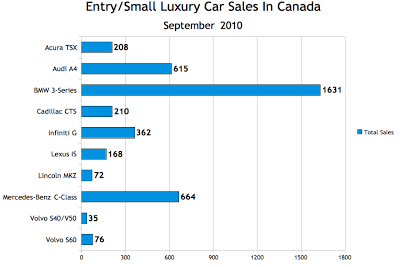 Home
All Vehicle Rankings
Entry Luxury Car Sales
The Good Car Guy has often been exultant when describing sales of the BMW 3-Series. Globally, the 3-Series is a power. In the UK, it’s not uncommon to see the 3-Series as a Best Seller. Not only did the 2010 BMW 3-Series land at #9 on the Canadian Best-Selling Cars list in September, though; the 3-Series also laid hold on an impressive 52.6% increase over September 2009 sales levels.

Of cars mentioned in the Graphs below, the following models also posted sales increases compared with September 2009: Acura TSX, Audi A4, Cadillac CTS, Lexus HS250h, Mercdedes-Benz C-Class, and Volvo S60. Speaking of the 2011 Volvo S60, it’s been shifted from its place in the Midsize Luxury Cars group, in part due to its Canadian base MSRP of $45,450, about the same as a BMW 328i xDrive. 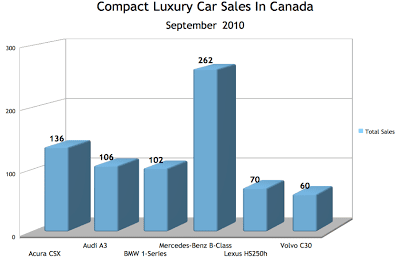