Apparently Audi dealers can lure away 5-Series and E-Class customers, so long as they’ve got a hatchback to offer.

Truthfully, so Audi isn’t really luring away many 5er and leader-of-the-pack Benz clients, at least not yet, not in the United States. But as potential Audi A6 buyers wait for the new model to come on stream and Audi sees A6 sales fall 40%, the new Audi A7 more than picks up the slack. Last year at this time there was no A7 and Audi midsize sales reached 784. This year, with an old A6 and the new A7 hatchback, Audi midsize sales hit 1282. The A7 was a big part of Audi’s overall 13.7% sales improvement in May 2011, although the A8 added another 430 new units to the tally and the A3, TT, and R8 also helped out with increases. 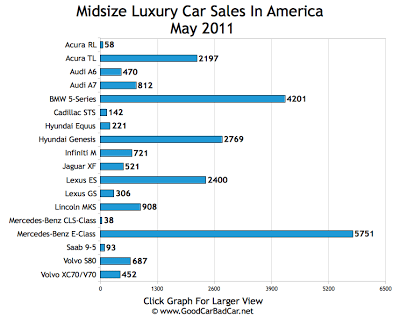 After looking at the Graph below you’ll think BMW and Mercedes-Benz’s luxury market dominance is nearly unbelievable. North of the border in Canada, May results just came in and show the BMW 3-Series and Mercedes-Benz C-Class as two of the country’s 20 best-selling cars. Admittedly, they were 19th and 20th, but that’s a marked difference from the States where the 3-Series makes only an odd appearance.

Of course, the huge declines at Lexus, Acura, and Infiniti relate almost exclusively to the crisis which began after the March 11th Tōhoku quake. Acura TSX sales, for example, were down 37.6% in May. That’s with a new wagon version to sell in addition to the sedan. Acura sold 194 TSX Sport Wagons. In case you’re interested – because the market certainly isn’t – TSX Sport Wagon sales through the first five months of 2011 stand at 1535. The 2011 Acura TSX Sport Wagon costs $970 more than the 2011 Honda Accord Crosstour, a Bad 8 stalwart, but only sold once for every six Crosstour sales last month. Crosstour sales were down 48%. 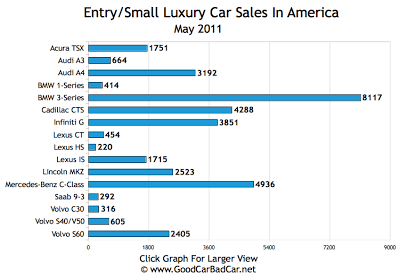