Joined by 516 sales of the 2011 Chevrolet Cruze in September, the gradually-deceasing Chevrolet Cobalt’s total last month makes it look like “General Motors” and “small car” go together like, well, “General Motors” and “small car”. But wait, the Cruze is supposed to be a really nice car. October should tell a very different story. Even so, don’t be surprised if buyers don’t respond favourably (at first) to a GM small car without huge incentives.

Cars of this type, both compact and subcompact, had a difficult road to tred in September 2009. Cash For Clunkers was over, and in the month prior, sales had spiked as most people who wanted a new fuel-efficient car got one in the month of August. To see September 2010 sales improve upon September 2009’s totals should surprise no one. That being said, Toyota Corolla/Matrix sales were down last month and are down year-to-date, as well. Suzuki SX4 sales were down 38.8% in September 2010. Kia Rio sales were down 41.7% last month. Other than those cars and the currently-changing-over Cobalt, every single subcompact and compact car on sale in America improved on last year’s figures.
Which, you know, says something about the Corolla’s performance, in particular, something Toyota might not care about since the Corolla/Matrix was the best-selling small car in America in September 2010.

As for the 2011 Ford Fiesta, which of course wasn’t on sale last year, sales have yet to reflect any efforts by Ford Motor Company to find more stock for North American dealers. This comes along with news yesterday that the Ford Fiesta is the best-selling car in the UK – again – with over 19,000 sales. Correct me if I’m wrong, but that’s over 19,000 Fiestas that somehow made it to UK Ford stores, unravaged by hurricanes and bad railways and bodystyle selections (ahem… no ugly sedans?) which didn’t reflect potential buyers’ tastes. Ford would’ve needed to more than double sales of the Fiesta in the U.S. last month just to be number two in the segment. 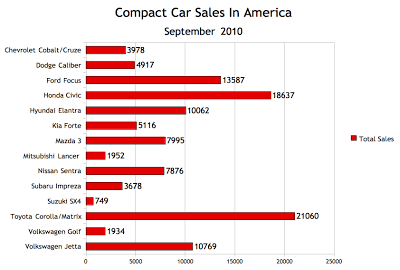 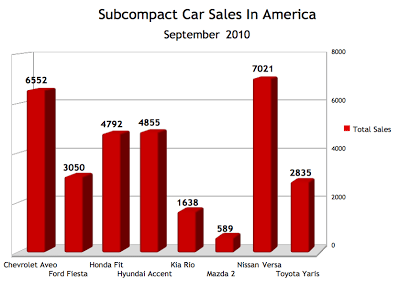