65% of Canada’s most popular cars can be found in the two Graphs below. Were the Kia Soul placed here instead of the Niche Car Sales chart, that number would rise to 70%. To Canadians, size doesn’t matter. Value, however, is of great importance. Small cars offer the equipment we require, just enough space for a small family, and the sort of efficiency small crossover buyers can only dream of (or remember from their previous car).

Subcompact cars and compact cars aren’t the halo vehicles of any automaker’s fleet. In certain cases, nonetheless, the power of these cars has helped to make a brand. Take the Honda Civic, for instance. The Civic is either the most well-known Honda or the second-most well-known Honda. Five years into the eighth generation and the Civic is still Canada’s best-selling car, not just in June, but in the first half of 2010.
On the other side of the coin are automobile manufacturers who know they’ve got to start caring about these segments but haven’t actually done so. The Subaru Impreza is a fine car, Driven by The Good Car Guy and considered to be a Corolla competitor with an extra dose of fun-to-drive; excluding low-volume performance derivatives like the WRX and STi of course.

Subaru will tell you about their rapid sales growth in North America, and they’re not lying. Yet Subaru finds its Impreza ranked way back in the field of compact cars thanks to a high base price – $20,995 compared to the Civic’s $15,990 – and all-wheel drive can’t account for $5K. Perhaps Subaru is content to remain an idiosyncratic firm, but they say they’re ready for the big time. Start with a viable compact competitor and consider selling a subcompact, too. More cars on the road will mean more people seeing your cars on the road, and that’ll help sell more of the expensive Outbacks and Forester XTs. 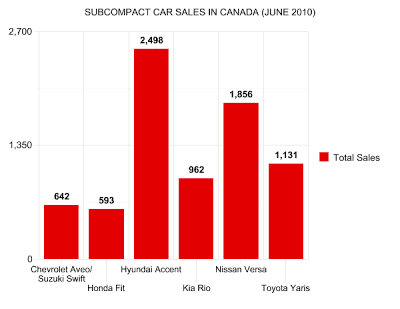 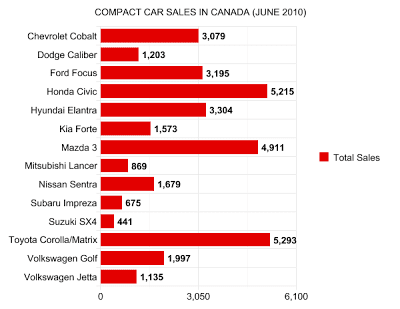