This marks the end of Ford’s excuses for the 2011 Fiesta. Hurricanes, train tracks, parts suppliers…. I don’t care anymore. Sales figures for the Fiesta haven’t been up to where they should be yet, beaten soundly by four competitors in the USA in August, and Ford has been in a valid place with its reasons why. Come September Sales Stats, however, and low-rung Ford Fiesta sales volume will be criticized for what it is: the results of what appears to be an overpriced subcompact car. August Fiesta sales were actually lower than July’s.

One size segment up, Ford isn’t struggling to sell the highly incentivized Focus. Only the Honda Civic and Toyota Corolla were more popular compact cars in America in August 2010. Again, thanks discounts… and SYNC. GM’s small car numbers should improve dramatically in the near future with the 2011 Chevrolet Cruze now in production in Lordstown, Ohio. Images of the 2012 Chevrolet Aveo bode well for the subcompact segment, as well. 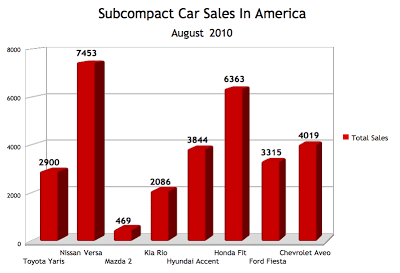 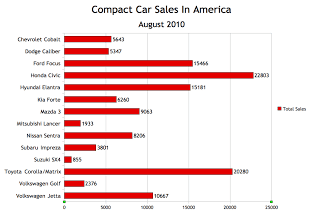