Of all the cars shown in the Canadian Graphs below, it was the Volkswagen Jetta that posted the greatest year-over-year percentage gain in March 2011, up 181%. Framed another way, however, the Honda Civic found 2246 more buyers this March than in March 2010, a figure which compares quite favourably with the Jetta’s 1575-unit increase.

In the Midsize Car Sales chart, no vehicle turned on the afterburners quite like the Hyundai Sonata, up 91.9% from March 2010 levels. Scrolling further down, the Buick Lucerne’s 248 sales represent a 61% increase.

As for the strugglers, of which there were some particularly pronounced offenders, the Nissan Cube, Mitsubishi Galant, Lincoln Town Car, Volkswagen Passat, Toyota Yaris, Toyota Camry, Suzuki SX4, and Honda Accord led the way. All eight of those cars saw their sales chopped in half, at the very least. Forgive Lincoln – the Town Car has been put out to pasture. Mitsubishi Canada isn’t even featuring the Galant on its website. And the Passat is on temporary hiatus, although that’s Volkswagen’s own problem, a problem which still represents a decline in demand.

But the Yaris, Camry, SX4, and Accord? The Camry ranked sixth among midsize competitors; the Accord eighth. The Yaris was less popular than the Hyundai Accent, Ford Fiesta, and Mazda 2. (Honda Fit sales dropped 32.8%.) 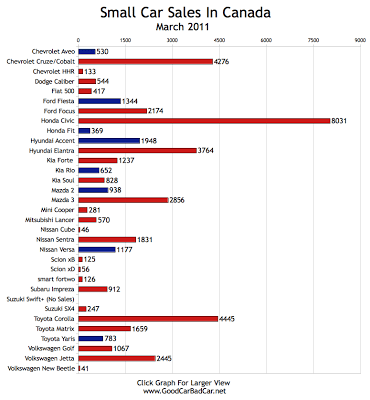 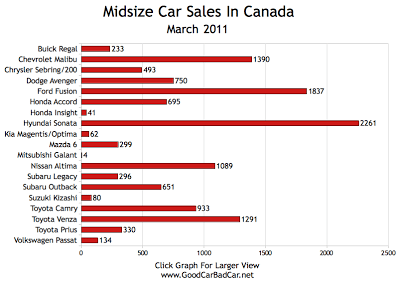 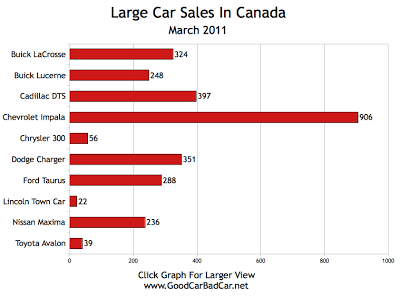