The overwhelming sales superiority of the Honda Civic and Toyota Corolla is more clearly seen at the end of the year than in any one month. You see, in any one month, the Ford Focus or Chevrolet Cruze or even the Nissan Sentra can put up a performance that’ll lead the casual observer to believe the U.S. small car sales war isn’t a two-man show. And in 2011 it may not be, what with the 2011 Hyundai Elantra and 2012 Ford Focus primed to gain momentum. But 2010’s year end figures tell an unsurprising story: the Honda Civic and Toyota Corolla/Matrix out-sell everything else by at least 87,000 units.

Then you have the Toyota Camry and its midsize rivals. There were months in 2010, December being the most recent, in which the Camry was not the best-selling midsize car. Yet by the end of the year, the Toyota Camry and its falling sales were still 16,423 up on the Honda Accord, its closest competitor. Paired with the Venza – as the Accord is always paired with the Accord Crosstour, and you see Toyota’s advantage over Honda rise to nearly 64,000 units. All this as Camry sales were down 8.1% and Accord sales were up 7.4%.

As was already mentioned when explaining the December 2010 large car sales results, how did Kia manage to sell that many Amantis? Sure, it’s the lowest number in the group, but it’s got to be one of the most egregious designs ever. On a more popular note, the Ford Taurus came roaring back in 2010 – sales were up 51%. That was enough to put the Taurus ahead of the Nissan Maxima. Will the big Nissan struggle with the new 2011 Infiniti G25 now present in the marketplace? The G25 starts at $30,950. The 2011 Nissan Maxima starts at $30,810. 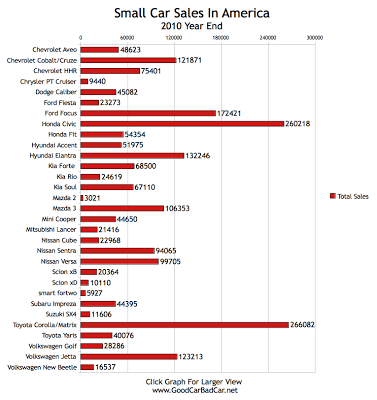 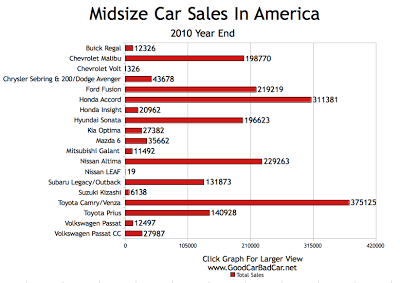 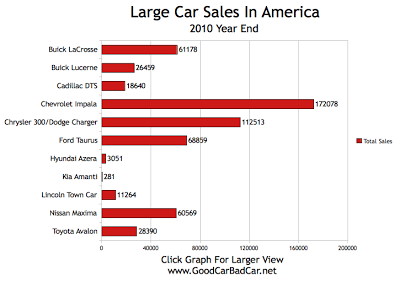