Mini sales listed here are not for the total brand. The introduction of the Mini Countryman has meant an increase in overall Mini sales, but the regular Cooper hatchback/convertible/Clubman gang are listed below. For those three, sales fell from 2247 in January 2010 to 2065 in January 2011. Countryman sales will be listed in the Small SUV Sales chart, regardless of what you want to call it.

Mini, of course, is a small volume brand. Include Daimler’s smart in a conversation like that. Though low, smart fortwo sales were actually up 28.8% in January 2011, a figure which tells you how bad things were in January 2010. Scion’s xd and xB were down 20.9% and 6.3% respectively in January. Other slow sellers include the Volkswagen New Beetle (down 87.5% but advertised in the Superbowl last night) and the Mazda 2, still unable to compete with players like the Nissan Versa, the new 2011 Ford Fiesta, or the soon-to-be-replaced Hyundai Accent.

Among larger midsize models, the Suzuki Kizashi made a push in January (up 12.5% from December) but the handsome Suzuki persists as a mostly forgotten Camry/Accord/Fusion/Sonata alternative. Still a fresh face in the market, the 2011 Buick Regal posted a 23.7% drop from December 2010 – the market as a whole slid, as well – but managed to out-sell the Mazda 6.

And in the largest car category, Lincoln Town Car sales were somehow up 11.7% over January 2010. The Town Car is supposedly extinguished, but it was one of just two Lincolns with improved year-over-year sales last month. Expect to see improved totals from Auburn Hills as the 2011 Chrysler 300 comes on line. Kia Amanti sales dropped by 96.4%. Bring on the Cadenza, would ya please?

Take special note of a multitude of cases where The Good Car Guy has split models which were formerly linked together. No longer are the Camry and Venza grouped, or the Outback and Legacy, or the 300 and Charger. Unfortunately, Toyota Motor Sales USA releases their data on the Corolla and Matrix as though they are one. 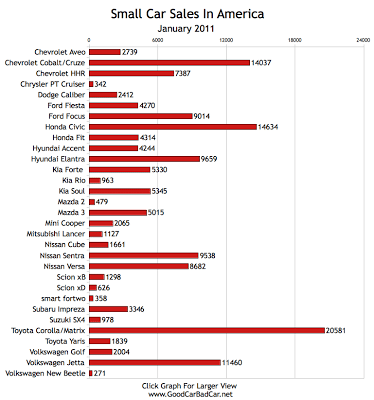 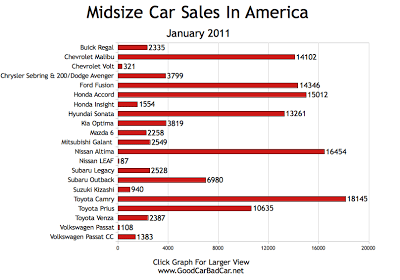 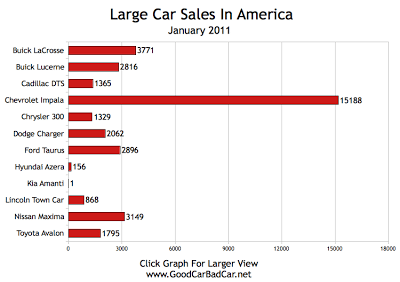