Buick’s meteoric rise found the brand ranked sixteenth in the overall standings in February, ahead of Cadillac and Lexus. Much of Buick’s 73.3% year-over-year increase in February came as a result of the 2011 Regal, a car which wasn’t on sale in February 2010. Apart from those 3705 sales, however, the Buick LaCrosse was up 7% and the Buick Lucerne nearly doubled its 1298-unit total from February of last year. The Ford Taurus and Nissan Maxima still managed to out-sell the LaCrosse in February – Taurus sales fell 11.6%, Maxima sales grew by 17 units. Buick’s ascension came as a result of booming sales achieved by four nameplates. Lexus sold nine different vehicles in February. Cadillac has three sedans and two utility vehicles with numerous iterations in between. The 2012 Buick Verano will propel Buick to even greater heights.

Speaking of the fifth-generation Buick Regal, February 2011 was its best month yet. Even so, the Regal trailed its nearest GM cousin by more than 15,000 sales: the Malibu was up 26% in February. The Chevrolet Malibu, however, was behind the Ford Fusion, Honda Accord, Nissan Altima, and Toyota Camry in terms of overall volume. Pay little attention to the Volkswagen Passat’s nearly nonexistent sales volume. For one thing, the Volkswagen CC still found 2329 buyers. Volkswagen is also keen on selling the 2012 Passat in considerably larger numbers.

191,666 sales are manifested in the Small Car Graph below. They’re not all direct competitors, of course. Nevertheless, market share stats remain relevant. 14.5% of those 191,666 sales are Toyotas; a number which climbs to 15.7% once the Scion xB and xD are accounted for. 16% of the small cars sales shown below are Hyundais or Kias. Passenger car sales rose 21.8% in February, yet sales of the Mini Cooper were off by 8.8% and Nissan Cube sales fell 20.1%. 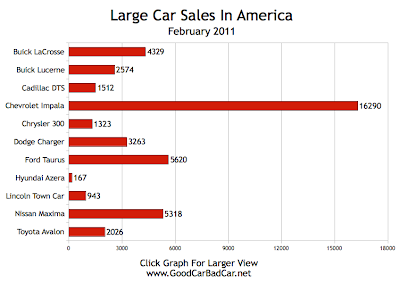 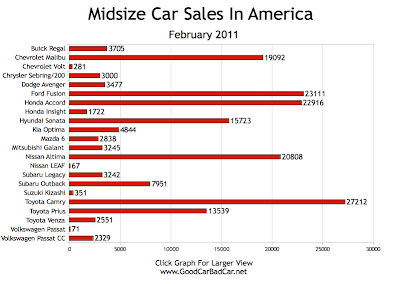 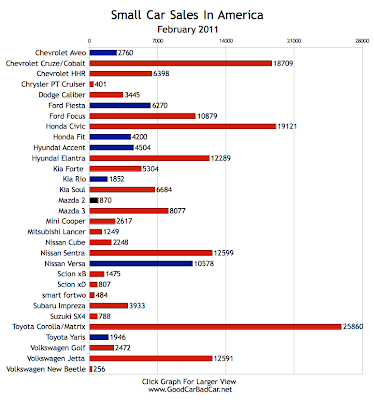