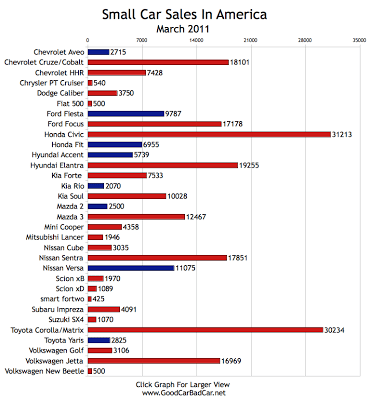 Home
All Vehicle Rankings
Passenger Car Sales
Small Car Sales
Compact Car Sales
The Honda Accord and Honda Civic came out of March 2011 looking like big winners in their respective classes. For the record, 441 of the Civic’s 31,213 sales were Civic Hybrids. Overall, Civic sales were up 39% over March 2010, though Civic Hybrid sales fell 23.8%. As for the Accord, 2083 of its 33,616 sales were Accord Crosstours. Accord sales were up 15.4% as a whole, but Accord Crosstour sales dropped 19.5%. The Good Car Guy took a deep look at some of Honda’s failures (and perceived failures) late last month.

Among the blue bunch, the competitive set typically called subcompacts, the Nissan Versa saw off a hard-charging Ford Fiesta to remain victorious in March. Versa sales dropped 19.4%, however, and are down 3.2% year-to-date. At this point in 2010, Ford wasn’t selling the Fiesta. But Fiesta sales did rise 56.1% from February in a market that grew only 17%.

The midsize car segment, though clearly the domain of Honda’s Accord, the Toyota Camry, Ford Fusion, Hyundai Sonata, Chevrolet Malibu, and even the Toyota Prius, isn’t immune to the wiles of the Subaru Outback. Sales of the Subaru SUVesque Legacyish wagon jumped from 7951 in February to 10,498 in March. This represents a 37.8% year-over-year bump. Moreover, the Legacy sedan was up 27.6%, adding 4450 to Subaru’s total.

Just how hot was the Honda Accord in March? Combined sales of the Buick LaCrosse, Buick Lucerne, Chrysler 300, Dodge Charger, Ford Taurus, Hyundai Azera, Nissan Maxima, and Toyota Avalon totalled 33,461 last month, 155 less than the total put up by the Accord. See it all in the Graphs below. 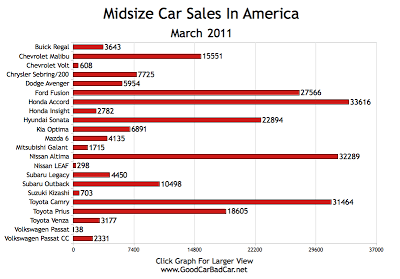 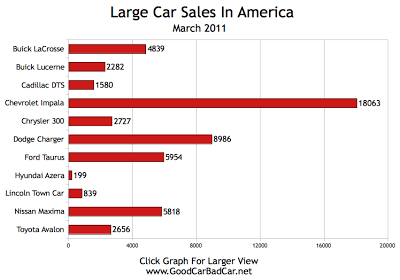