Sales of the Toyota Avalon, Nissan Maxima, Lincoln Town Car, Hyundai Azera, Dodge Charger, and Chrysler 300 declined in year-over-year Sales Stats last month. Perhaps this isn’t the best time to be selling a 19-mpg full-size V8 sedan like the $38,170 2011 Chrysler 300C. Perhaps efficiency has nothing to do with its 21% sales drop. Perhaps… 864 missing Chrysler 300 buyers acquired a 2012 Fiat 500 instead – there were 882 of those sold in the U.S.

The Chrysler brand sold one other car in April, the 200. There were no PT Cruiser sales, no leftover Sebrings, no New Yorkers, not a single LeBaron. Compared with the Sebring’s April 2010 volume, Chrysler 200 sales shot up 104%. Its platform-mate, the Dodge Avenger, posted a 26% improvement. As a duo, the Avenger/200 would rank seventh in midsize car sales in April. The Good Car Guy wrote extensively on the subject of the Chrysler 200 sales for Cars.com’s Kicking Tires blog back in early April.

If the Avenger/200 duo would’ve ranked seventh, that means there were many cars selling in vastly superior numbers. With 30,443 sales, the Toyota Camry beat the Honda Accord for top spot in the segment and best-selling car overall by just 133 units. After a strong March, the Nissan Altima fought for a 17% year-over-year bump but fell 47% month-to-month.

Among the smallest cars on sale in the United States, it’s apparent that the Honda Civic and Toyota Corolla no longer have a market monopoly. Cruze sales shot through the roof in April, up 84% on the Cobalt’s April 2010 tally, as Chevrolet topped the Corolla/Matrix tandem and beat the Ford Focus by nearly 8000 units. 37 of those Cruze sales come from leftover Cobalts. Expect the 2012 Focus to come on stronger over the course of the summer.

All the data you need can be found in the three charts below. 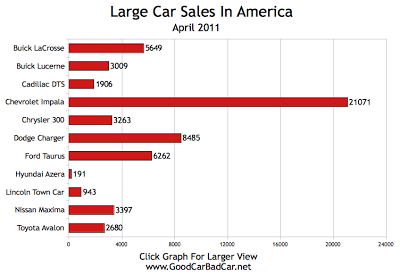 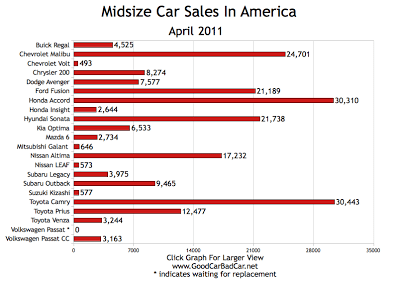 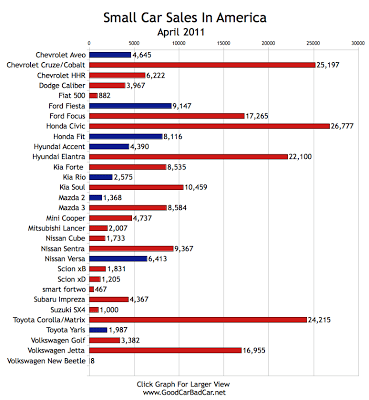