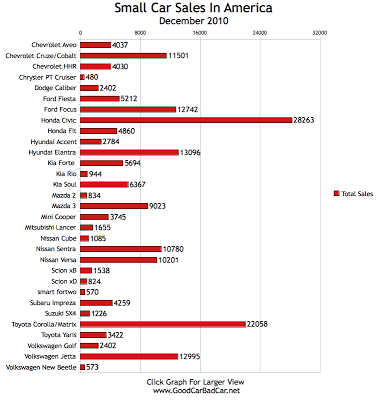 Home
All Vehicle Rankings
Passenger Car Sales
Small Car Sales
Compact Car Sales
Quite often, in analysing a GoodCarBadCar.net Sales Stats chart, attention is paid to the vehicles with impressive percentage increases or large overall volume. Today, at least with the three Graphs you see below, let’s change things up.

There’s no denying now that the 2011 Ford Fiesta has caught on. It isn’t yet able to conquer the much less-expensive Nissan Versa, and it’s by no means the most popular small Ford, but the Fiesta is doing alright. Which leads one to wonder at the absolute lack of success found by the Mazda 2. Many believe it to be better looking; almost all reviewers say the Mazda is the better drive. So what’s the deal? The same problem has afflicted Mazda as the Tribute has fought for sales in a class where the identical Ford Escape is part of the dominating class. American new car buyers generally ignore Mazda. Subaru sold some 30,000 more vehicles in 2010 in the USA.

Moving up a category, take a look at the low sales of the Honda Insight. Though the Insight’s volume compares unfavourably with just about any similarly-priced car, there is one specific vehicle which shines a light on Honda’s failure. The 2011 Toyota Prius starts at $22,800, $4600 more than the 2011 Honda Insight, but the Honda’s price advantage accomplishes nothing. By the time U.S. Toyota dealers are about to sell their tenth Prius, American Honda dealers find their first Insight buyer of the month.

Now, the Chevrolet Impala is no rival for the Cadillac DTS. On opposite ends of the full-size spectrum, the two vehicles are placed in the same chart because there really is no proper place for a few of the vehicles in the Large Car Sales chart. But there’s one other vehicle which really stands out from the pack with its awful performance, the Kia Amanti. True, the Amanti is technically a dead car, Kia’s introducing the Cadenza soon. The Amanti, however, should’ve been dead before Kia ever let it get out to dealerships around the world. One of the ugliest vehicles to ever reach production, the Kia Amanti was a member of The Bad 8 until Kia made clear they’d kill it off. Here’s the crazy thing: somebody bought a new Kia Amanti in December.

Check out the charts below for all the info on small car sales, midsize car sales, and large car sales in America from December 2010. 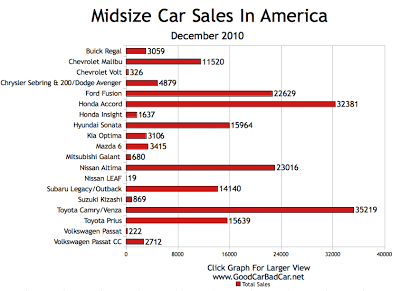 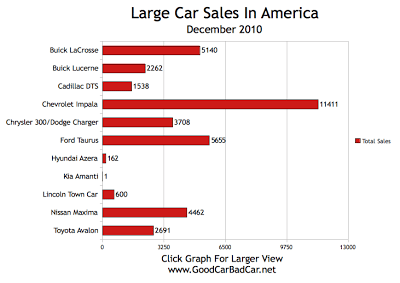