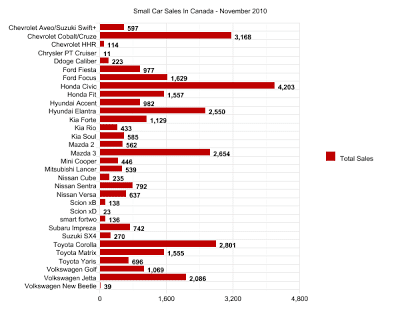 Home
All Vehicle Rankings
Passenger Car Sales
Small Car Sales
Compact Car Sales
There’s no doubt about it, the 2011 Volkswagen Jetta is now a veritable larger rival for the 2011 Toyota Corolla, the 2011 Mazda 3, the hot-selling 2011 Chevrolet Cruze, the all-new 2011 Hyundai Elantra, and a revamped 2012 Honda Civic. Finishing sixth among small cars in Canada is akin to landing in sixth on Canada’s best-selling cars list. Oh wait, it’s exactly the same thing – the Jetta was Canada’s sixth-best-selling car in November 2010.

However, the 2011 Volkswagen Jetta isn’t really all that small. No, the truly small cars are a segment below, cars like the Ford Fiesta, Mazda 2, and Hyundai Accent. The Fiesta is pickin’ it up, but none of these cars are selling particularly well. Blame the top-notch stuff of slightly larger cars like the new Cruze and new Elantra, cars which barely cost more than their smaller counterparts. The Honda Fit is a striking exception to this rule, but only in the month of November. Fit sales were up 249% last month.

All the sales numbers for Canada’s small car competitors are in the Graph below.