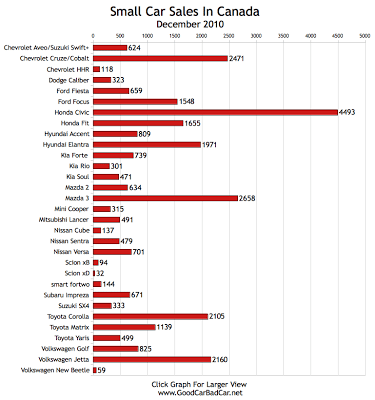 Home
All Vehicle Rankings
Passenger Car Sales
Small Car Sales
Compact Car Sales
It had become increasingly clear since Mazda first put up a fight at the beginning of the year that Honda wasn’t going to easily let go of its hold as the top-selling car in its segment or its Best-Selling Car In Canada crown. And though Honda appeared to have this all locked up before December 2010 even began, the Civic’s crushing victory over all comers was a signal that, even with an aging model, Honda wasn’t backing down in 2011, either. The Civic’s lead over the Mazda 3 by New Year’s Eve was 1835 units; more sales than the Ford Fiesta, Hyundai Accent, and Suzuki SX4 combined.

A look at some weak performers in December includes some surprising inclusions. Kia Soul sales remained far stronger than anything Nissan could put up with the Cube, but still, the Soul was down 19%. Cube sales were down 42%. On the year, smart sales were down 24%, but December was particularly bad with a 36% decline. Golf sales seem to be suffering a bit with the introduction of the very inexpensive 2011 Volkswagen Jetta. Non-GTI Golf sales were down 43% in December; the GTI was off 6%. For proof of the Jetta’s impact on the Golf, consider how overall Golf/City Golf/GTI/Jetta sales reached 2985 this December and a not insignificant 2273 in December 2009. The Jetta is picking up new buyers, for sure, but Golf sales began suddenly disappearing just as Jetta sales took off.

But if you really want to talk about rough performances in December, think Toy….oh….tah. Add up all Toyota sales in the Graph below and you’ll find 3869 sales. Last year, without Scion, Toyota would’ve accumulated 8074 sales.