Helped by deals and by being one of the better small cars available, the Honda Civic zoom-zoomed past the competition in Canada and beat its nearest rival by 2164 sales in October 2010. There’s more on the top sellers from the first Graph you’ll see below in both Canada’s Best-Selling Cars list from October 2010 and the Best-Selling Japanese Cars In Canada from October 2010. On a more interesting note…

The 2011 Ford Fiesta is starting to finally make a name for itself. Although the long-standing Canadian favourite and significantly less-expensive Hyundai Accent is still dominant, and while the Nissan Versa and Toyota Yaris both out-sold the Fiesta, the Ford’s 868 total made it one of the best-selling American cars in Canada last month. There is also now a more realistic supply of Fiesta on Canadian Ford dealer lots. But with the 2012 Fiat 500 soon to be a challenger at Chrysler/Dodge/Jeep stores, can the Fiesta grab a consistent thousand sales per month?

BMW certainly grabs its 1000+ sales per month with the famous 3-Series. Available in four different bodystyles and with five different engines, BMW has a 3-Series to meet just about anyone’s needs, so long as “anyone” has $37,650, the price of the 323i. One change marked in October 2010’s rundown of small and small-priced luxury cars is the switcheroo between Germany’s two other 3-Seriesesque cars. The Audi A4 held off the Mercedes-Benz C-Class for second place honours by a scant two units. Good for Audi, nonetheless. Hopefully plenty of those A4s sold were painted in Teak Brown Metallic. 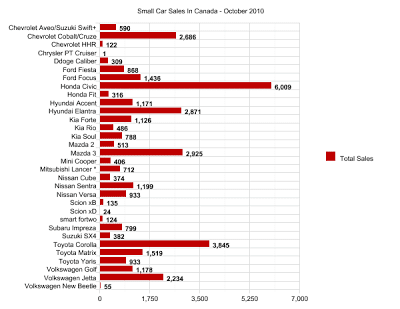 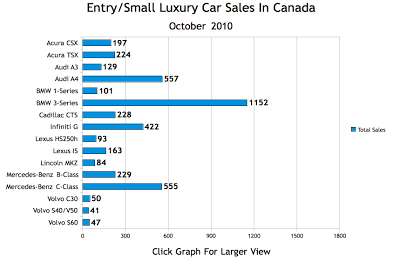