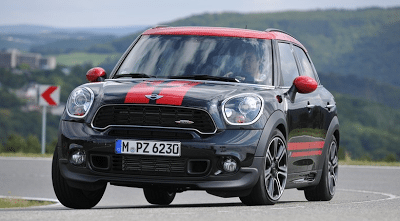 The Countryman had been creeping close throughout the summer, but September marked the month in which Americans registered more Countrymans than regular Cooper Hardtops.

Combined, non-Countryman Minis – the Hardtop, Convertible, Clubman, Coupe, and Roadster – accounted for the majority of Mini sales, but they clearly make up the majority of available Minis, as well. The Countryman was the best-selling Mini variant in America in September.
September 2012 YTD – All 265 Vehicles Ranked
Regardless, Countryman sales jumped 66% in September 2012. The Coupe and Roadster weren’t on sale at this time last year, but other year-over-year comparisons weren’t so kind to BMW. Hardtop sales fell 5%, Clubman sales dropped 9.5%, and Convertible sales plunged 31.5%.
The Mini brand was responsible for 18.4% of all BMW-Mini sales in America in September. BMW’s four X models accounted for 34% of the company’s U.S. volume.