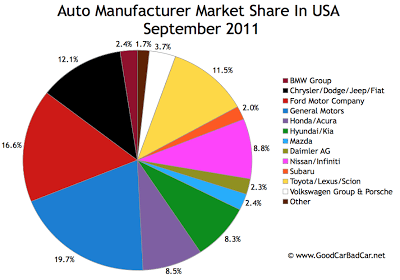 Home
Top Level Reports
Brand Marketshare
The Ford Motor Company and General Motors were both able to grow their market share from August to September. Though the gains may’ve been slim, the increase from 16.3% to 16.6% for Ford and 19.7% to 20.4% for General Motors is still better than what the Chrysler Group achieved, staying level at 12.1%.

The BMW Group landed with a narrow increase. The year-over-year drop reported by American Honda wasn’t nearly as bad as it had been for months; market share jumped from 7.6% in July and 7.7% in August to 8.5% in September. Hyundai/Kia slid a full percentage point, though sales were much stronger than in September 2010. Like BMW, Mazda, Mercedes-Benz, Nissan, Subaru, and Volkswagen posted slight improvements in U.S. auto market share, as did the collective group of brands which go unnamed.

Toyota Motor Corporation saw its share of the U.S. market decrease from 12.1% in what was a decent August to 11.5%. However, unlike Hyundai/Kia’s sales performance, there’s not a lot of spin Toyota can put on its market share decline. In September of last year, Toyota’s market share was 15.3%. Hyundai and Kia did post a significant month-to-month drop, but at least there were significant gains year-over-year, from 8% in September 2010 to 8.3% last month.

The American automotive industry’s market share chart for September 2011 is below.