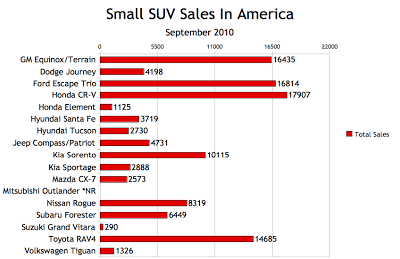 Home
All Vehicle Rankings
SUV Sales
Small SUV Sales
Before we go any further, let’s be clear that sales for Land Rover models were unreported as of the construction of the second Graph below but LR2 sales are now known to be 306 in September 2010 in the USA.

In the same Graph, the one you see nearer the bottom of this post, the Cadillac SRX is continuing to crush the similarly-priced European, Acura, and Infiniti competition. If you told General Motors executives that the 2010 Cadillac SRX would, in September 2010, nearly out-sell the Mercedes-Benz GLK350, Audi Q5, and BMW X3 combined, I don’t think they’d have believed you. But the SRX’s 4027 sales in September compares very favourably with the German trio’s 4108.

Thousands of dollars down the price scale, the 2011 Kia Sorento was America’s fifth most popular small (or small-priced) utility vehicle in September. This is an incredible accomplishment for Kia, but not as impressive as the Sorento’s consistent sales. Not the result of one month of incredibly overpowering incentives or a contract with the government to supply a whole department with SUVs, the 2011 Sorento has just plain been a frequent choice at dealerships. In a month where its partner vehicle, the Hyundai Santa Fe, suffered a sales drop of 47%, the Sorento’s showing reflects desirability in a big way. Expect Santa Fe sales to pick up in October, with a firm supply of 2011s.

Noteworthy among small mainstream SUVs and crossovers is the Honda CR-V, now America’s best-selling utility vehicle for the calendar year, and the Toyota RAV4, with its 41.2% sales jump. 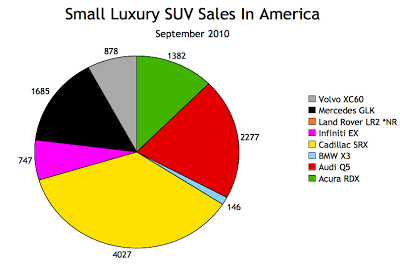