The bold, attractive, and powerful 2011 Ford Edge is motivated Ford sales to levels unreachable by any other automaker in September 2010. Edge sales jumped 186.2% from September 2009 as the midsize crossover out-sold every other midsize (or large, for that matter) utility vehicle in America in September. Only the combination of GM’s Lambda platform-based Buick Enclave (4408 sales), Chevrolet Traverse (7914), and GMC Acadia (4608) could conquer the Edge.

On the luxury page of the midsize utility vehicle story, declining sales of the Lexus RX didn’t take away its best-seller status. RX350 and RX450h sales were down 9.8% from 8228 last September but remained 3343 units ahead of the next-closest competitor, the Acura MDX. BMW X5 sales increased dramatically in September, up 161%. This comes as BMW X3 sales plummeted from 1000 in September 2009 to 146 last month. 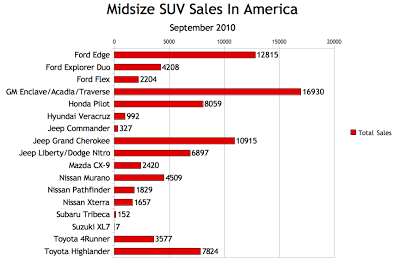 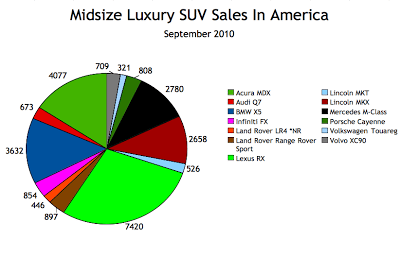