Finally Kia dealerships who’ve been needing an Optima replacement for years have gotten one. The 2011 Kia Optima is a looker, a prime candidate for a sales boom not unlike that which has gone on with the 2011 Kia Sorento in the past year or so. But where’s the Kia Cadenza? The Kia Amanti, one of the ugliest cars of all time, is still languishing on dealer lots. Be gone with you, Amanti. Long live the Cadenza.

If the 2012 Hyundai Accent is anything to go by, the next Kia Rio has a lot of potential. Kia has quite a small car portfolio to begin with. The Kia Forte (and new Forte 5-door) and Kia Soul combined for nearly 11,000 sales in America last month, a figure unmatched by Mazda’s small car team of the 2 and 3. A revitalized Rio could really launch Kia to the next level.

Autoblog has driven the 2011 Hyundai Elantra and came away really impressed. Unlike Canada, in which small cars are the best-sellers and the Camry/Accord/Fusion/Sonata sit further back, the Elantra’s segment in the United States is more appreciated when gas prices rise and the economy is in a weakening rather than strengthening state. That said, with that smokin’ hot body and the distinct possibility of a Touring model in the near future, the Elantra will climb up the Best Sellers list, but probably not as far as Hyundai supporters would like it to.

What of Ford, General Motors, Chrysler, and Dodge? Dodge Caliber sales shot up 666% in November 2010. But is that a story of fervent Caliber-directed desires? Probably not. Caliber sales were only 412 units strong last November, so a return to proper sales levels sounds like huge gains, but Caliber sales were still just 3154 in November 2010, placing the Caliber 17th in its Graph below. Buick LaCrosse sales remain steady even as GM brass get excited over increased Regal sales which, to be honest, are a lot lower than they should and could be. Ford Taurus sales fell back 10.6% in November but are up 64.8% on the year. 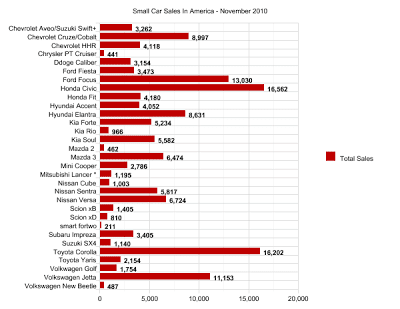 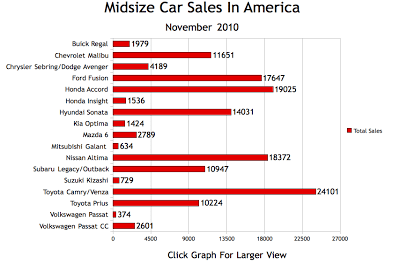 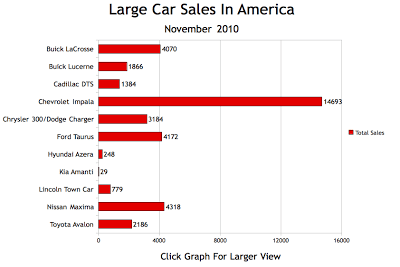