In other Niche Car Sales news, the Kia Soul was the Korean automotive brand’s number two model in July, out in front of the Kia Forte but behind the 2011 Kia Sorento. While overall BMW’s Mini brand was down 11-2% in July, sales of the regular Mini Cooper and Cooper S hatchbacks were up 2.9% to 3,125. Blame the Mini Convertible (down 32.8% to 573) and Mini Clubman (-36.1% to 628) for family problems.
Among SUVs and trucks, the Wrangler brought the bacon home for Jeep in July. Only the Grand Cherokee came close to the Wrangler in overall sales. Jeep Wrangler sales were up 121% in July and are up 5% to 56,192 year-to-date. While you’re amazed that only 210 residents of the United States acquired Hummers in July, The Good Car Guy is wondering how Hummer found 210 buyers in the span of one month. Similarly the Acura ZDX: is 578 Acura ZDX sales a low figure or, given its dreadfulness, rather lofty?
Details on the Passat CC, Soul, Mini, Wrangler, Hummer, and ZDX are in the Graphs below along with numerous other niche market vehicles. 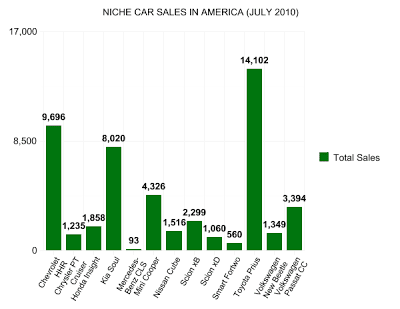 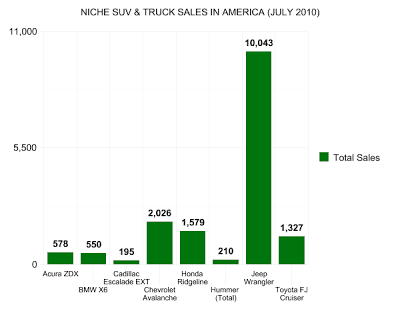