Decades after everyone realized rear-engined cars and huge horsepower don’t mix, the Porsche 911 is still a relatively hot seller. Okay, so the Toyota Camry sold nearly 90 times more often in the United States in April, but the 911 does manage to make its direct competition look somewhat unpopular. How does a rear-engined car with huge horsepower – an acknowledged mismatch – make it work?

Start with the relentless pursuit of perfection. Yes, that’s the old Lexus tagline, but Porsche deserves credit for millions of hours spent testing suspension geometry until the 911 Turbo, even with 500 bhp, followed its front wheels with rear wheels when rounding a corner. Speaking of the 911 Turbo; that iconic label is just one of sixteen different 911 models available to U.S. customers at the moment. Sixteen doesn’t include the 911 GT2 or the much talked about Porsche 911 GT2 RS, a gobsmackingly hardcore racecar for the road. Right now, six 911 cabriolets and ten hardtop 911s compete for attention against, for instance, the Nissan GT-R. The GT-R is available in one body configuration with one engine, painted one of a few available colours. How ’bout the Audi R8? Stupendous though it may be, the Audi R8 can be outfitted only as a V8 or a V10, in hardtop or convertible form.
So long as you qualify for financing, you can have a Porsche 911 built exactly how you like it. All-wheel drive or not? Care to drop the top or simply remove a part of it? The Targa can do the latter. Upgrade the basic boxer-six in S tune or go further with the GT3. Add turbos. Try mixing Turbo with Cabriolet. Whatever you want, you can have it. And more than with any other car in the Graph below, people choose to have it – the Porsche 911. 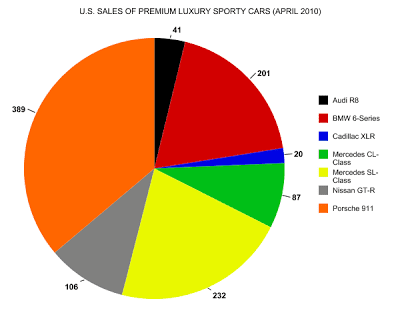