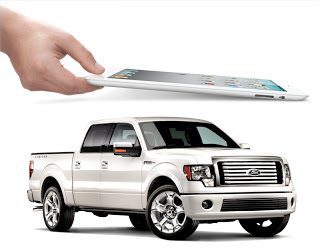 While watching Fareed Zakaria GPS yesterday on CNN.com, I heard it said that iPad market share in the tablet category is currently around 80%.

Canada’s 20 best-selling vehicles are, together, about as popular as the other 230+ nameplates on sale today. Last month, Canada’s 20 best-selling vehicles were more popular, so you could say there’s an underlying sense of the peloton catching up to the lead pack. One might develop that sense after a bit too much analysis on the matter. More to the point, let’s get back to the notion of 80% market share.

Nearly six out of every hundred vehicles sold in Canada in April were Ford F-Series pickup trucks. The F-Series is the leader, the high and lofty noble one far above the plebeians, just like the iPad. But it’s a long way from eight out of every ten. Let’s narrow it down to just pickup trucks. Although an April chart hasn’t been posted in this category yet, I can tell you that the Ford’s market share in the truck segment was 35.4% last month. Zooming in even closer, the F-Series range’s market share in the full-size truck segment was 44.3%. Domestic trucks? The number shrinks. It’s going to be hard to find an area in which the F-Series has iPadesque market share numbers.

So, to see its dominance, compare sales of the Ford F-Series with the combined sales of the 17th, 18th, 19th, and 20th best-selling vehicles in Canada – not an unpopular group by any means. The F-Series out-sold the Hyundai Accent, Hyundai Sonata, Chevrolet Equinox, and Jeep Wrangler by more than 400 sales in April. We don’t call it iPadesque, but in the car world, that’s downright F-Series-like.

The 20 best-selling vehicles in Canada are listed in beside the market share pie chart below. 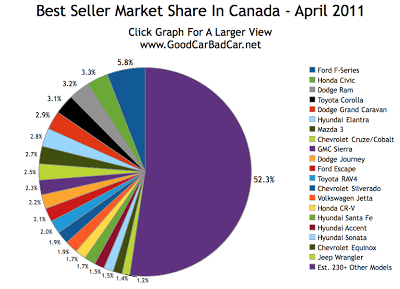