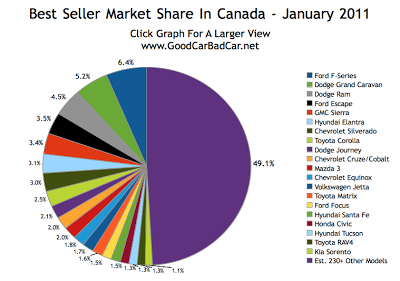 Home
Top Level Reports
Marketshare
Unlike the U.S.’s January 2011 situation, Canada’s 20 best-selling vehicles are valued at 51% of the overall market. That’s right – 8% of the nameplates owned more than half the market last month. As is the case in the United States, the Ford F-Series leads the way, but in Canada, Ford trucks do so in even more dominant fashion, a story GoodCarBadCar.net has already covered.

Together, the four big pickup brands (F-Series, Dodge Ram, GMC Sierra, Chevrolet Silverado) constitute 57% of the top seven sales achievers in Canada. This equates to more than 17% market share for trucks; 14,591 sales; 18.3% up from last year – and we haven’t even taken the slower sellers into account. Canadians can complain about fuel prices with the best of’em, but not until position #6 of the best-seller Graph below does a car enter the arena. Cars, in the traditional sense of the word, made up only eight of Canada’s 20 best-selling vehicles. Although a change in that status seems entirely possible, Canada’s love of pickups and small SUVs and crossovers (seven of which are in the chart below) is running interference at the moment.

Incidentally, leading the purple section of the chart (the 230+ other models holding 49.1% market share) is yet another small utility vehicle, the Nissan Rogue. Sales of the Rogue were up 12% to 908 in January, just 31 behind the Kia Sorento. Immediately following the Rogue you’ll find another pickup truck, then a couple cars mixed in with four more SUVs, before eventually landing at the 2011 Hyundai Sonata, ranked thirtieth in Canada in terms of overall January sales volume.