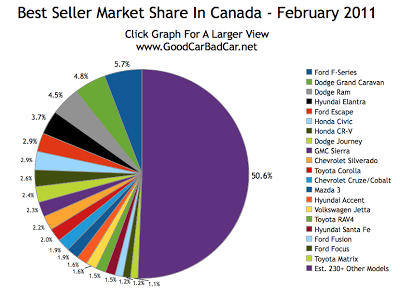 Home
Top Level Reports
Marketshare
The list of Canada’s 20 best-selling vehicles changed in February, but only slightly. Of greater importance to followers of this Graph is the purple slice’s portion of the pie. At 50.6% of all vehicles sold in Canada, the 230 or so “other models” took home 1.5 more percentage points in February. This means that, on the whole, Canada’s 20 best-selling vehicles weren’t quite as popular in February as they were in January.

Half of the 20 Best Sellers were domestic products. One was European: the 2011 Volkswagen Jetta. Half of the 20 were cars. There’s one minivan, five utility vehicles, and four trucks. Those trucks, of course, are all in the top 10. 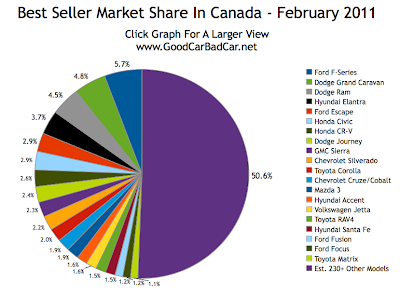