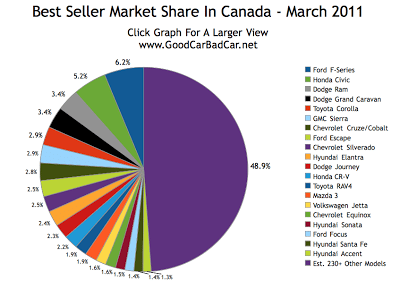 More than six out of every hundred vehicles sold in Canada in March were Ford F-Series pickup trucks. After owning “just” 2.9% of the overall new vehicle market in Canada in February, the Honda Civic’s market share grew to 5.2% in March 2011. Down among the narrower pie slices in this Graph of Canada’s 20 best-selling vehicles, the Toyota Matrix and Ford Fusion fell off the list and were replaced by the Hyundai Sonata and Chevrolet Equinox. The Sonata and Equinox combined to own 3.1% of the overall market – the Fusion/Matrix market share clump in February 2011 had been 2.6%.

For more on new vehicle market share in Canada, check out the biggest brands here and luxury brands here. Oh, and if ever there was a reason for you to stop saying, “Nobody can afford to fuel a big truck,” it’d be now. Thousands of Canadian buyers – many of them rental companies and governments and corporate fleets, admittedly – considered themselves capable of paying for the gas in an F-150, Ram, Silverado, Sierra, Tundra, Titan, Escalade EXT, or Avalanche in March.